Length: You can hike this as an out-and-back and pick your distance. From the trailhead on Gerton highway, it is approximately:

You can also do a shuttle hike between the Bearwallow Mountain trailhead and the Wildcat Rock trailhead, which is 6 miles total.

Difficulty: Moderate to very strenuous. The most strenuous section is between the waterfall and the ridgeline meadow.

Photo above by Gordon Tutor

If you enjoy places like Wildcat Rock Trail, become a member of Conserving Carolina! We’re always working to create new parks, trails, greenways, and public lands. Your membership supports conservation and we’ll keep you in the loop about the latest news, outings, and events.

How to Get to Wildcat Rock Trail

Park at the Upper Hickory Nut Gorge Trailhead, where you can also access the Florence Nature Preserve. Take the crosswalk across Highway 74A to get on the Wildcat Rock Trail. Look for the trailhead kiosk near log stairs that lead down to an apple orchard.

Accessing the Trail from Bearwallow Mountain

The expanded Wildcat Rock Trail is shown in orange on this map of the Upper Hickory Nut Gorge Trail system. 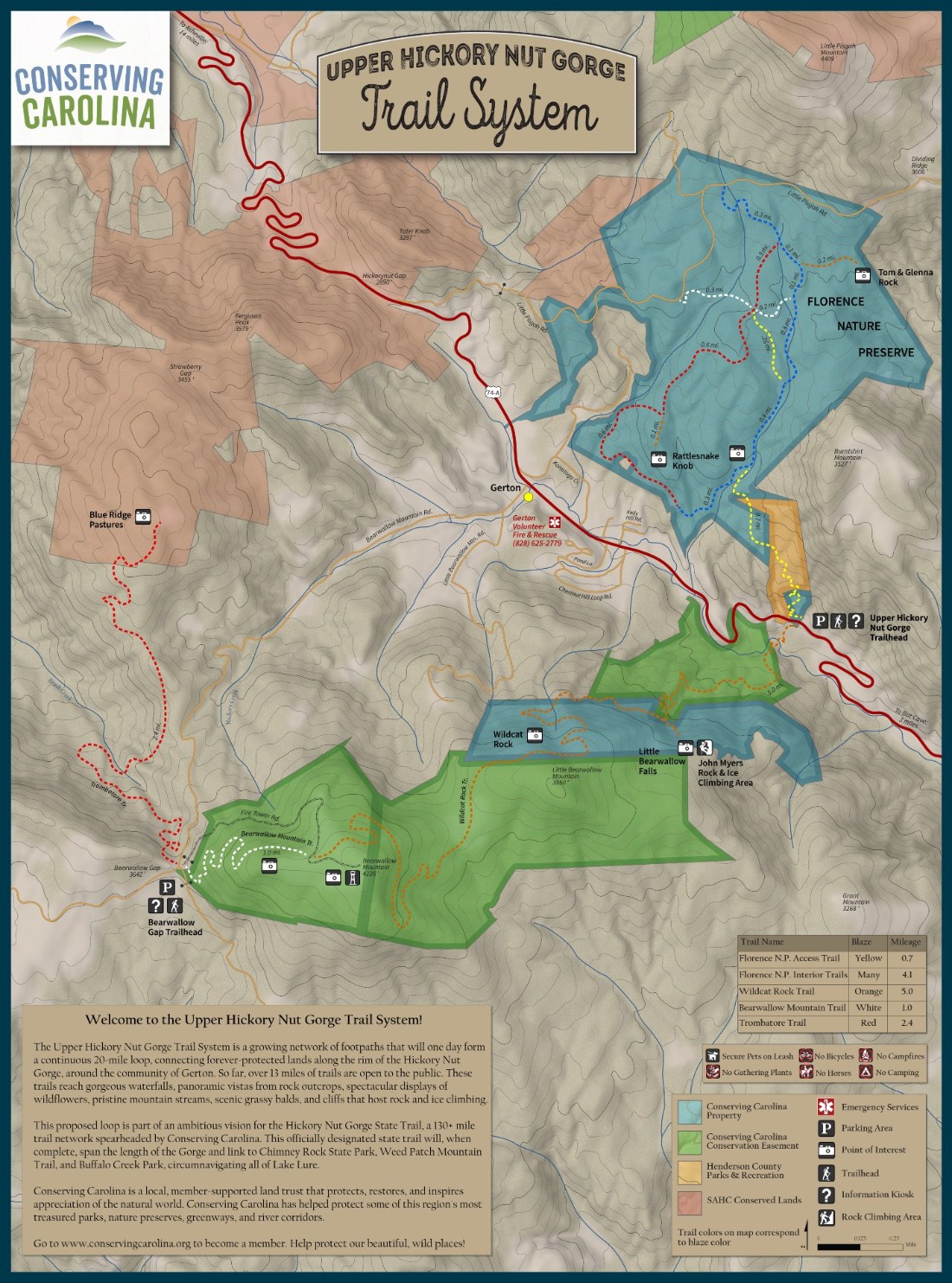 What to Look for on the Trail

The following directions describe the hike if you start from the trailhead on Gerton Highways and hike up.

Finding the Start of the Trail

From the Wildcat Rock Trail kiosk, follow the log stairs down to the apple orchard. The trail goes around the apple orchard and crosses Hickory Creek on a wooden bridge before beginning its ascent.

Following a strenuous climb that ascends more than 100 log stairs, you will reach the 100-foot Little Bearwallow Falls at about the one mile mark. This waterfall is particularly impressive in spring when its water volume is high and the banks of the stream are lush with wildflowers. The waterfall sometimes dries up during the heat of summer, so don’t be surprised if the water is sometimes “turned off”!

The waterfall and surrounding rock face is also quite the spectacle during the winter when it freezes into a solid sheet of ice. The rock and ice have become a popular area for climbers. Rock and ice climbing are permitted at your own risk. This location is called the Little Bearwallow Falls Climbing Area and is dedicated to the late John Myers—the property’s former owner, conservation champion, and an avid climber.

Beyond the waterfall, the difficulty of the trail increases significantly. Because it is more rugged, narrow, and steeper in comparison to the section that accessed the falls, the section of trail beyond Little Bearwallow Falls is rated as “hardcore” in difficulty. More than 130 rock stairs ascend the side of the cliff-line and provide a great view looking back toward the falls. The trail parallels multiple scenic cliffs and rock faces as it continues to ascend.

At almost two miles, it reaches the Wildcat Rock Overlook Trail, a spur trail on the left. A short 0.1 mile (but steep, with 90+ rock stairs!) reaches the top of Wildcat Rock and a dramatic viewpoint of the Upper Hickory Nut Gorge. You can take in views of Little Pisgah Mountain to the north, Blue Ridge Pastures to the west, and historic Hickory Nut Gap to the northwest. This spot is a great vantage point to view the sunset, as well as enjoy native blueberries in late summer.

Beyond the spur path to Wildcat Rock Trail, the main trail continues another mile to reach the ridgeline of Little Bearwallow Mountain near its summit in a grassy meadow frequented by grazing cattle.

The trail ends here—for now—so return the way you came back to the trailhead. No camping or campfires are permitted in this meadow or anywhere along this trail.

In November of 20202, we celebrated the opening of a new two miles of trail that connects to the Bearwallow Mountain Trail. Along this uppermost section of the Wildcat Rock Trail, you can enjoy a rare mountain bog, a stand of old growth forest, and beautiful boulderfields. This trail eventually leads to the open pastures and panoramic views on top of Bearwallow Mountain.

Creating a Loop in the Upper Hickory Nut Gorge

Conserving Carolina partnered with Upper Hickory Nut Gorge conservation champions John Myers and Jane Lawson as well as the Brock family in 2013 to acquire and preserve 128 acres on the north slopes of Little Bearwallow Mountain. This is the land that most of the Wildcat Rock Trail crosses. John Myers and Jane Lawson protected an additional 38 acres of their property through a conservation easement with Conserving Carolina in 2017. The first mile of the Wildcat Rock Trail crosses this land.

Now protected forever, Wildcat Rock tract is considered one of the most biodiverse locations in the Natural Heritage Inventory of Henderson County. In addition to its 100-foot waterfall and scenic rock outcroppings and cliffs, it is renowned for its diversity of wildflowers. The property includes rare types of natural communities including Rich Cove Forest, Montane Cliffs, and Carolina Hemlock Forest. It lies within the state-designated Little Bearwallow Mountain Significant Natural Heritage Area.

Funding from the Donald C. Jones Foundation, Fred & Alice Stanback, and donors to Conserving Carolina like you made possible the permanent protection of the Wildcat Rock tract.

Story of an Award Winning Trail

In 2018, Conserving Carolina and our trails coordinator Peter Barr received the national Coalition of Recreational Trails’ Achievement Award for Wildcat Rock Trail, in the design and construction category. We went the extra mile to make this trail sustainable and enjoyable and we’re thrilled that it was recognized as one of the best-built trails in the nation!

Conserving Carolina designed the trail, using highly sustainable design to minimize impact to the land and protect the conservation values of the mountain, streams, and flora and fauna. The trail was constructed between 2013 and 2017 with the support of numerous partners.

Trail Dynamics and the Vermont Youth Conservation Corps (YCC) constructed the first mile to Little Bearwallow Falls. Crews from both the North Carolina YCC and Vermont YCC constructed the mile between the waterfall and Wildcat Rock. American Conservation Experience and volunteers from the Carolina Mountain Club built the final mile. Additionally, Benchmark Trails constructed more than 300 artfully-masoned rock stairs at Little Bearwallow Falls and Wildcat Rock. Conserving Carolina’s Rock Crushers Trail Crew aided with construction through the length of the trail and continues to provide ongoing stewardship and improvement projects.

We’re always working to open new parks and trails to the public. Find some awesome places that are new to you. Or learn more about a place you love.

FIND MORE PLACES TO GET OUTSIDE