The Lasting Legacy of John Myers

Towering cliffs, stunning waterfalls, mystical forests and bountiful biodiversity are just a few of the treasures that make the Hickory Nut Gorge so exceptional.

It is with a heavy heart I share that the Hickory Nut Gorge has lost its greatest treasure of all: John Myers.

A conservationist, rock climber, landowner and dear friend to me and so many, Myers passed away last month at the age of 66 after battling ALS.

John was the catalyst, visionary and champion of hundreds of acres of protected lands and dozens of miles of new public trails, especially in the Upper Hickory Nut Gorge.

For more than a decade, he and his beloved partner Jane Lawson partnered with Conserving Carolina to not only protect cherished natural resources, but also make them accessible for enjoyment by hikers and climbers.

“To be honest, it felt impossible when he first laid it all out to me,” Ryan Lubbers recalled his thoughts from when he stood with Myers atop the summit of Bearwallow Mountain a decade ago, listening to John’s grand vision for a network of trails and protected lands across the dramatic landscape of the Hickory Nut Gorge.

Lubbers had only recently met Myers and moved to the small community of Gerton. He had purchased land from Myers on which to build a home in the budding eco-community of Hickory Nut Forest, one of John’s many projects.

“What I came to learn from John is that nothing is impossible,” said Lubbers. “Improbable, maybe, but not impossible.”

Myers’ vision became less improbable every day since then. He partnered closely with Conserving Carolina and other organizations and individuals to make his vision of conservation and recreation become a reality. 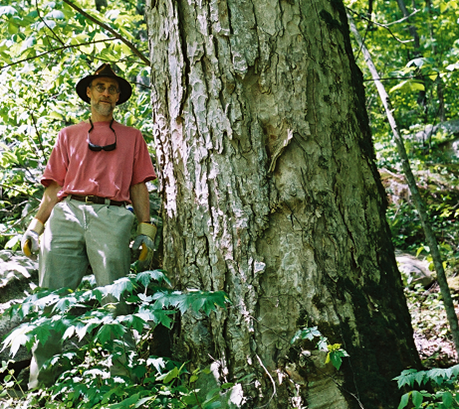 John’s land was only the starting point for his impact. Myers turned to his neighbors, captivating them with his vision and spellbinding them with his enthusiasm for it. He discussed the merits of conservation and public trails with the late Sonny Barnwell, then adjacent landowner of iconic Bearwallow Mountain.

According to Conserving Carolina Land Protection Director Tom Fanslow, “When I sat down at the kitchen table with Mr. Barnwell to work out the conservation of that mountain, John had been at that kitchen table before me.”

Just last year, in 2017, the final phase of conservation was completed in partnership with the Lyda family — Sonny’s heirs — totaling nearly 500 acres forever protected on Bearwallow’s scenic summit and ridgeline.

Myers also formed a friendship with fellow Hickory Nut Gorge rock climber Sean Coburn in 2003. Their lust for more public access for climbing and protection of the spectacular cliff faces led to their involvement in an early planning process during the creation of Chimney Rock State Park.

Drawing from Myers’ previous experience working with organizations such as the Access Fund and Trust for Public Land and leveraging Coburn’s leadership within the Carolina Climbers Coalition (CCC), the pair worked together to purchase properties along the ridgeline of rugged Rumbling Bald Mountain — land now part of the State Park.

“He worked masterful deals. We didn’t know how we were going to pay for them. But we did it,” said Coburn. “John dreams big.”

“Then we said ‘where can we go from here?’” Myers and Coburn set their eyes toward a conspicuous rockface on Laurel Knob, near Cashiers. This alluring cliff — the highest in all of eastern America — was a forbidden fruit to climbers. “It was this hallowed place where few people had ever climbed.”

With little knowledge about it, the climbing and conservation duo began exploring the rock and dreaming of how they might achieve something special for it.

Myers ultimately tracked down the owner. “Legend has it that John actually bought the lady flowers,” said Coburn, confirmed by Myers. “He cut a deal for a quarter million bucks. Here I am the president of the CCC with $20 in our bank account. But we did it.”

Myers most strongly associated himself as a rock climber, a pursuit that brought him joy his entire life.

Fittingly, one of the rock faces for which he personally achieved permanent protection and a public trail to reach it will forever be named in his honor. The Little Bearwallow Falls rock and ice climbing area was dedicated to John when project partners with friends and family gathered in December at his Laughing Waters Retreat in Gerton.

“He has done so much for the climbing community. I can’t think of anybody who has done more,” said Coburn at the dedication.

The event also celebrated several other milestones reached in John’s big vision, including 38 additional acres of his own property forever protected, and the completion and opening of the three-mile Wildcat Rock Trail (which includes the climbing area).

It was at that cliff that John’s friend (and wife to Ryan), Jane Vogelman Lubbers, shared a memorable adventure only a year prior.

While hanging on the side of the rock, she was struck in that moment how John’s ear-to-ear grin was perfectly characteristic of his love of the Hickory Nut Gorge and his reverence for nature.

“You wouldn’t be surprised to know that John climbed the same way in which he lived his life: incredibly graceful, and incredibly humble,” she said.

Jane plans to teach her children, Kai and Maple, how to climb at John’s cliff when they are older.

“He would be so happy to know our kids are climbing there,” said Jane. “And I know that John will still be there — in the rock, in the waterfall, in the sunshine and in the leaves. And so will his joyous smile, just in a different form.”

I was fortunate to share several of my own memorable adventures with John. We careened down precipitous slopes on the north side of Little Bearwallow looking for a viable trail route. We searched together for a new climbing area on the side of Rich Mountain. And we took to the sky in an airplane, mouths agape the whole flight, gazing down on our beloved Hickory Nut Gorge.

I will dearly miss the opportunity to have more with John, but each one yet to come will be inspired by, or made possible, by him.

I’m also grateful that he left me no shortage of things to do. It is a great thrill of my life, as Trails Coordinator for Conserving Carolina, to be able to devote an entire career solely to realizing the rest of John’s conservation and trails vision in the Hickory Nut Gorge. In fact, he gets the blame (or credit?) that I no longer regularly pen these columns — John even had something to do with that — so that I can dedicate more time to the pursuit of his trails vision.

At December’s dedication ceremony, Myers reflected on what had been accomplished since he first set out with his plan:

“I have loved being the one to come up with the big exciting ideas that always end up taking more time than anyone ever imagined they would,” he said humorously.

“All that has been accomplished here in the Gorge over the past dozen years has been because of partnership. Many people have helped make all of this happen. But our biggest partnership has been with Conserving Carolina.

“We always dreamed how great it would be if we could protect this land and have a trail system running through the Hickory Nut Gorge. We shared the idea with Conserving Carolina, and they have taken it and run with it. I credit their hard work, dogged persistence and patience to see these things through.

“It makes Jane and I feel so happy that so many people are able to enjoy this land and this special place,” Myers added as he closed.

John’s memory will unequivocally and forever live on among the protected lands and trails that he made possible. I, and Conserving Carolina, will never stop honoring him by continuing the pursuit of his lofty vision and goals in the Hickory Nut Gorge.

In our final communication, John wrote to me: “for all I know, this may just be the beginning of many wonderful things in the future.”

Indeed, John, realizing your vision has only just begun.