Land may be added to Mountain Bogs National Wildlife Refuge.

To create an expansive wildlife refuge out of small and isolated mountain bogs, it takes some patchwork and some mending. Once, there would have been about 5,000 acres of Southern Appalachian mountain bogs, woven amongst other kinds of wetlands. Today, there’s only about 10% of that amount, a mere 500 acres, which makes mountain bogs one of the highest priorities for land conservation. On Nov. 22, Conserving Carolina announced the protection of two properties that help protect our remaining mountain bogs. The goal is to add these properties to the Mountain Bogs National Wildlife Refuge.

The properties are located in Henderson and Translyvania Counties and total nearly 100 acres. Both adjoin protected mountain bogs and safeguard the water supply for those bogs. Protecting these properties helps to save the rare communities of plants and animals that are clinging to existence in our mountain bogs.

Consider one exotic-looking group of plants—pitcher plants. These plants can’t draw adequate nutrition from the poor bog soils, so they’ve found a way to supplement their diet. That’s what those deep, pitcher-shaped leaves are for. The vessels hold alluring, scented pools that draw insects. But once inside the pitcher, the insect is trapped, unable to make its way up the slippery leaves, past downward-pointing spikes. The animal becomes food for the plant.

Yet, amazingly, some insects make their homes inside these carnivorous plants. One of them, the pitcher-plant moth, lives inside the dangerous pitchers both as a caterpillar and an adult. The caterpillars can emit strands of silk that act as safety ropes in case they fall. And the adult moths have specialized feet can grip the plant’s sharp spikes.

Pitcher plants also need to maintain good relationships with their pollinators, often bumblebees. It’s not in their best interest to eat the bugs that help them reproduce. So, pitcher plants are designed to keep visitors to their flowers well away from the traps formed by their leaves. (Learn more in this In Defense of Plants podcast.)

Pitcher plants are just one window into the extraordinary life in a mountain bog. Bogs are home to other endangered plants, such as swamp pink and bunched arrowhead. They support seemingly out-of-place “disjuncts”, like Eastern cottongrass—a species that is usually found near the coast. One vital plant in the bog community is sphagnum moss, a living sponge that can hold up to 26 times its weight in water. This moss acts as a reservoir that provides a water supply for the bog even during droughts. Appalachian mountain bogs provide habitat for North America’s tiniest turtle as well as breeding grounds for many kinds of salamanders. Bogs support more common kinds of animals as well, including game species like ducks and grouse.

Related: Learn more about the plants and animals that live in Southern Appalachian mountain bogs.

But mountain bogs need our help. Almost all of the bogs that we have left have been degraded to some degree by human impacts. Some have been drained, ditched, or dammed. Others have been polluted by stormwater runoff from encroaching development. Add to that the threat of poaching by people who steal and sell endangered plants and animals (a felony offense). Then, throw in the threat of climate change that could overstress an already precarious balance. Today, many of the extraordinary plants and animals that live in our mountain bogs are on the brink of extinction.

That’s where the patchwork and the mending come in.

The patchwork involves finding the last remnants of bogs that we have and stitching them together in a kind of conservation quilt. The two properties recently protected by Conserving Carolina are both located on the edge of protected mountain bogs, and they help provide a clean water supply for the bogs. They protect the bogs against runoff that could be polluted with sediment, pesticides, or fertilizers.

Tom Fanslow, Conserving Carolina’s Land Protection Director, says, “Many people assume that it’s illegal to destroy wetlands.  In most cases that is true, and yet we continue to see destruction of wetlands, not just from outright dumping of fill, but degradation due to nearby land disturbance. Ownership of these two sites gives our conservation partners the best ability to safeguard this fragile bog habitat with ample buffers of undisturbed forest.”

Conserving Carolina’s goal is to add these properties to the Mountain Bogs National Wildlife Refuge. While most national wildlife refuges cover vast spans of unbroken habitat, the vision for this one is different. This refuge is a collection of scattered, high-priority sites, including mountain bogs and the land surrounding them. Founded in 2015, the refuge currently includes over 7,000 acres. Ultimately, it could encompass 65,000 acres, mostly in North Carolina, if the owners of that land choose to conserve it.

The ownership model is unique, too. The refuge is managed by U.S. Fish and Wildlife Service, but the agency doesn’t plan to own outright all of the land in the refuge. Many properties will remain in private ownership, with conservation easements to protect their natural resources. In order to respect private landowners and to preserve endangered species, the refuge does not offer public access.

Gary Peeples, who works in the Asheville field office of the U.S. Fish and Wildlife Service, says “The idea behind the refuge is to work with partners not to create a single, large block of conserved land, but rather support a conservation effort focused on conserving discrete, high-priority areas.”

When David Lee, Conserving Carolina’s Natural Resources Manager, ventures into one of these preserves, he takes great care. A trip into the bog starts with a wash station where you sterilize your rubber boots, to avoid introducing pathogens. The muck in the bog sucks at those boots at every step, threatening to topple you into the mud—and sometimes succeeding.

In the bogs, Conserving Carolina’s team removes invasive plants like multiflora rose, privet, autumn olive, and Japanese knotweed. They also take out rhododendrons that shade the sun-loving bog plants. This kind of stewardship creates space for the bog community to expand. At the same time, Conserving Carolina is restoring other types of wetlands, including natural floodplains at multiple sites along the French Broad River.

This is the mending—taking ecosystems that have been worn to shreds and bringing them back toward wholeness.

“As a dramatic example of restoration,” Peeples says, “decades ago, a Henderson County bog had its stream ditched and was converted into a farm field. However, a restoration effort returned the stream to a natural state, re-established wetland soils, and brought native plants back to the farm field.  An endangered plant was once feared lost from the site, but flourished in the wake of restoration. Conserving Carolina has been a tremendous partner in bog restoration efforts, playing a leading role at several sites—to the benefit of the bogs and the imperiled species that live there.”

Recently, at a protected bog, Conserving Carolina’s Conservation Easement Manager, Torry Nergart got to admire the fall color of an endangered pitcher plant, which had turned burgundy and yellow. Inside its deep red leaves was a tempting pool of water. This bog edge is a playground for a botanist like him, abounding in unusual plants. But, he said, they don’t need to be so extremely rare.

He reflected on the work of a partner, the Atlanta Botanical Garden, which has a program where they propagate endangered plants from seed.

“What they’re doing is a last ditch effort to stop extinction,” Nergart says. “What we need to be doing is making more wetlands. We need to make more habitat and then we can have more of those rare plants and animals.” 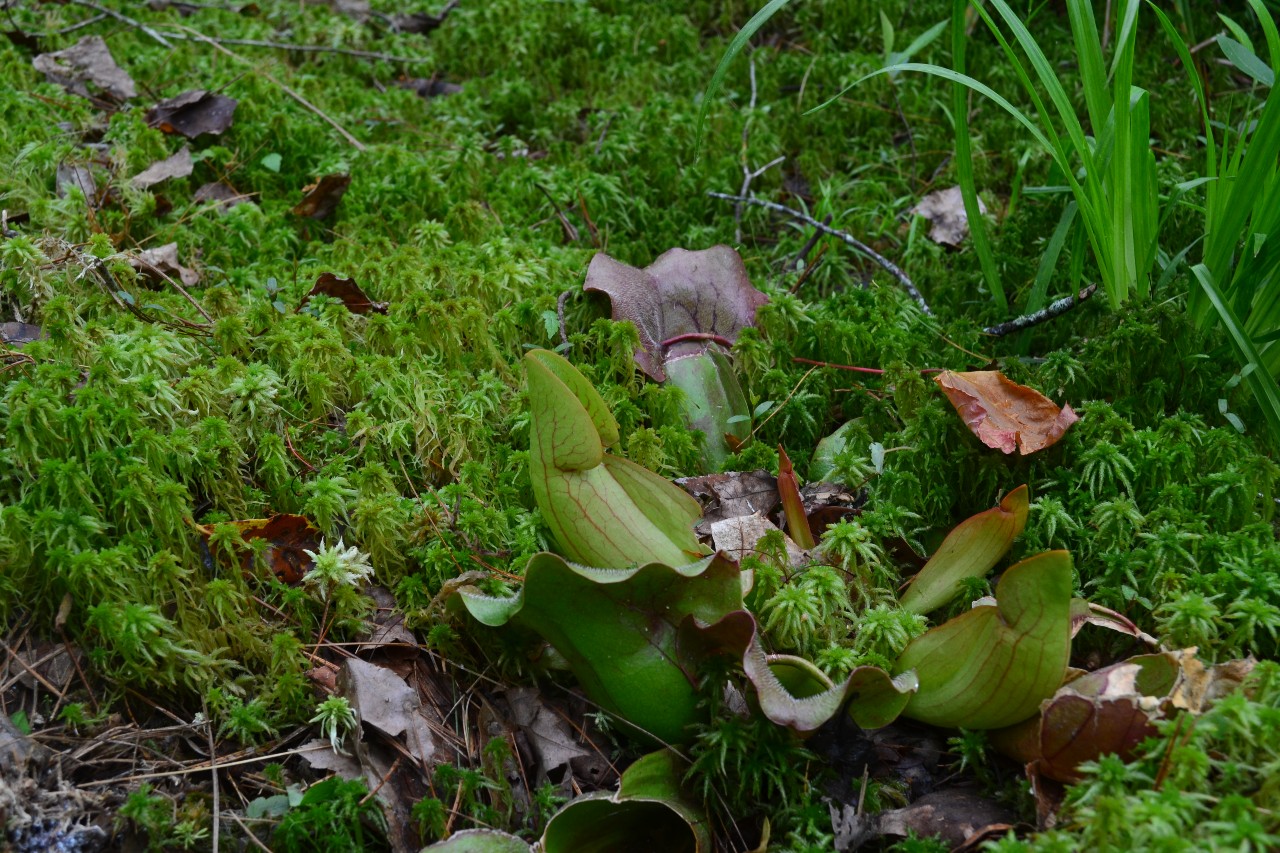 You can help protect mountain bogs by making a donation. Thank you!