Mountain bogs contain some of the rarest species of plants and animals in the Southern Appalachians. These species largely depend on bogs for their survival, though habitat is often disturbed by housing development, agricultural use, and groundwater depletion.

A mountain bog is defined as a type of isolated wetland containing acidic, nutrient-poor, and saturated soil fed by groundwater. Overtime, they can accumulate peat, or deposits of dead plant material which serve as excellent protection from predators and the elements. Unlike northern bogs of glacial origin, Southern Appalachian bogs are saturated by groundwater that form within flat valleys and gentle slopes near headwater streams.

Conserving Carolina actively manages four mountain bog preserves. This time of year, one preserve in Henderson County resembles a scene from Jurassic Park with its giant ferns, spongy moss, and moisture-loving plants. But no dinosaurs here—this bog is home to other special creatures. Here’s a glance at the rare mountain bog habitat in our region and the not-so-extinct plants and animals that live in it!

There are less than 2 dozen populations of Southern Appalachian Purple Pitcher Plant in the Blue Ridge Mountains. They are known to occur in mountain and seepage bogs of western North Carolina, northwestern South Carolina, and northeastern Georgia. Threats include shade from tree canopy closure, hydrological changes caused by drainage, lack of fire, and even habitat loss. This extraordinary plant is also threatened by poaching by collectors. 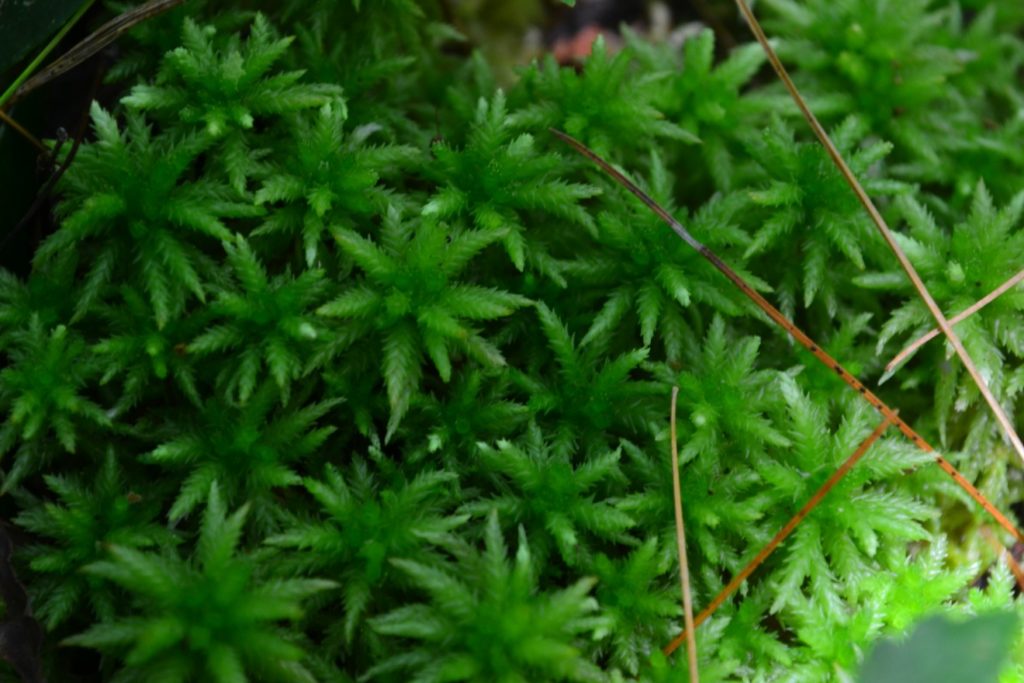 There are about 89 different species of Sphagnum Moss in North America. Sphagnum grows in dense, low mats primarily within acidic and nutrient-poor bogs. It can hold up to 26 times more water than its dry weight. This large amount of water retained by the moss is slowly released over time, helping to maintain the hydrology of a bog. Even in periods of serious drought, the soils under sphagnum mats are cool and moist; and water is made available to the surrounding plants and animals. 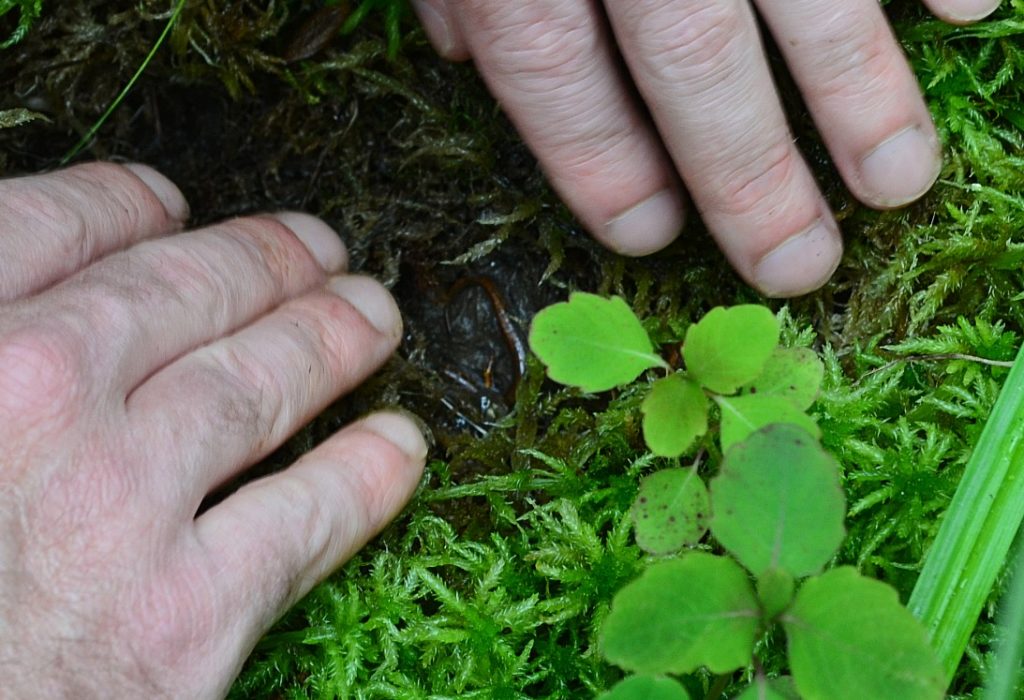 The four-toed salamander is one of many species that depend on sphagnum for survival. Although a difficult salamander to locate, females can be found guarding their eggs near water with abundant moss. Adults grow up to four inches long and during reproduction, females will utilize sphagnum for protection and nesting. Adults feed on spiders, worms, ticks, ground beetles, and other insects. Its natural predators include raccoons, opossums, and even birds. The four-toed salamander is listed as a species of Special Concern in North Carolina.

Mountain Sweet Pitcher Plant is an insectivorous species native to the bogs in our region. According to the U.S. Fish and Wildlife Service, it is a carnivorous perennial herb with tall, hollow, pitcher-shaped leaves and red sweet-smelling flowers. The unusually shaped flowers appear from April to June, with ripened fruits in August.

When insects fall into its pitchers, they are digested and the nutrients help sustain the plant. Evolution behind carnivorous plants is not fully understood, though some evidence points to insects as a key factor in enabling the species to compete in nutrient-poor habitats such as bogs. This species is extremely rare. Only 10 populations are known to exist in the southern mountains of North and South Carolina.  Due to poaching, trampling, and destruction and degradation of wetland habitats, this species is listed as Endangered. 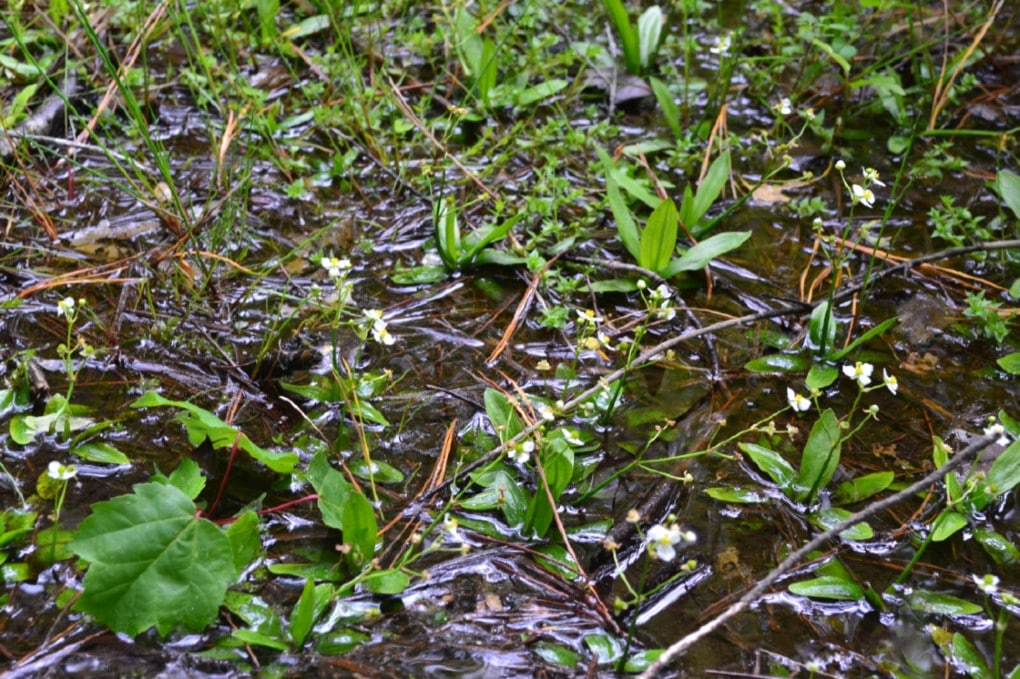 Bunched Arrowhead is a small plant only known to grow within a couple of counties in the Southern Appalachians. White flowers can be seen from mid-May through July and it is considered threatened due to the current rarity of its required habitat. Remaining populations are at risk from both residential and industrial development, conversion to pasture, and invasive species. This species is listed as Endangered.

The bog turtle is the smallest species of turtle in North America, reaching only 4.5 inches long. Bog turtles are known to exist in a variety of open-canopy, groundwater-fed wetlands in the Southern Appalachian Mountains. These unique communities offer protection from predators and sunlight for incubating eggs and basking. They will eat insects, worms, snails, amphibians, and crustaceans. During the summer, they will lay 3-5 eggs within Tussock grasses. According to The Nature Conservancy, loss of critical mountain bog habitat poses a major threat to their populations. It is listed as Threatened by the State of North Carolina. 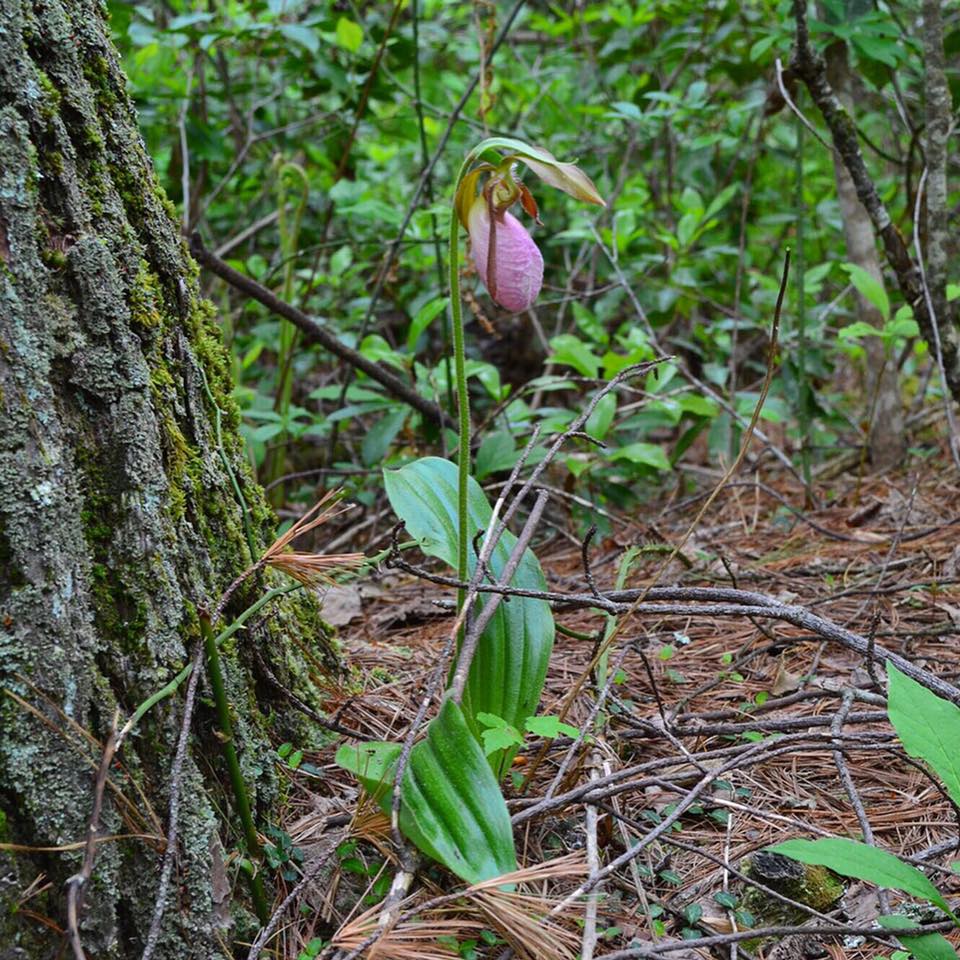 Pink Lady’s Slipper is recognized as one of the most unique flowers found in the East. As part of the orchid family, it has a surreal, oval-shaped pink petal and boasts brilliant blooms between May and July. In order to survive and reproduce, it requires a particular fungus to break open its seed, attach itself, and pass on nutrients for multiple years until it is able to flower. The fungus and the flower will form a symbiotic relationship, sustaining one another, and from the time a seed is dispersed, it can take up to 17 years for it to bloom in the wild! 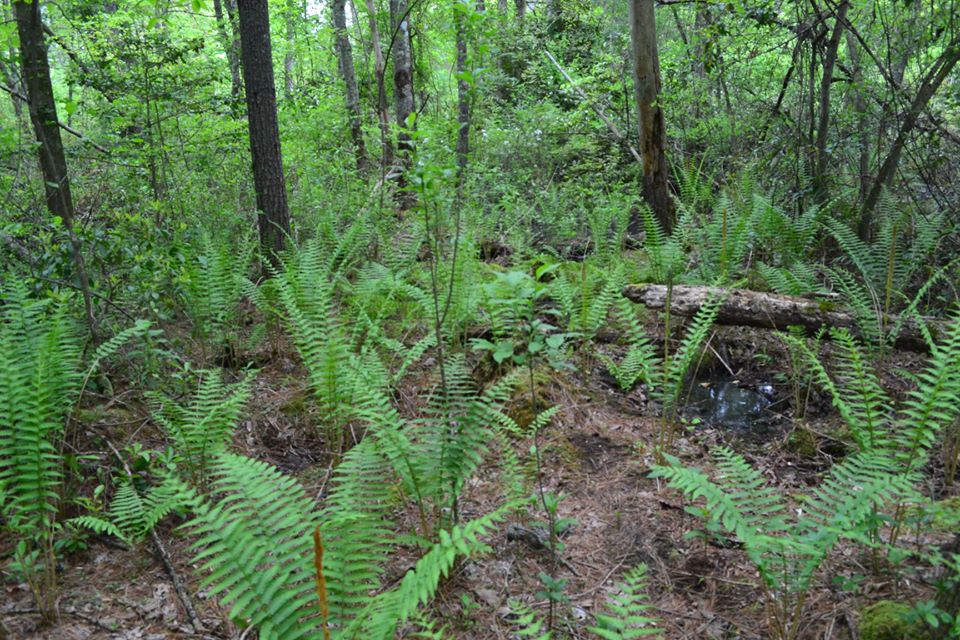 Cinnamon Fern is specially adapted to wet areas. With constant moisture, it can reach upwards of 6 feet tall! Over time, they can spread to form large colonies with their dense, creeping rhizomes. The name for these massive ferns refers to their frond-spike located in the center of the plant, which looks like they were dipped in cinnamon! It is a common and welcome sight in our local bogs. 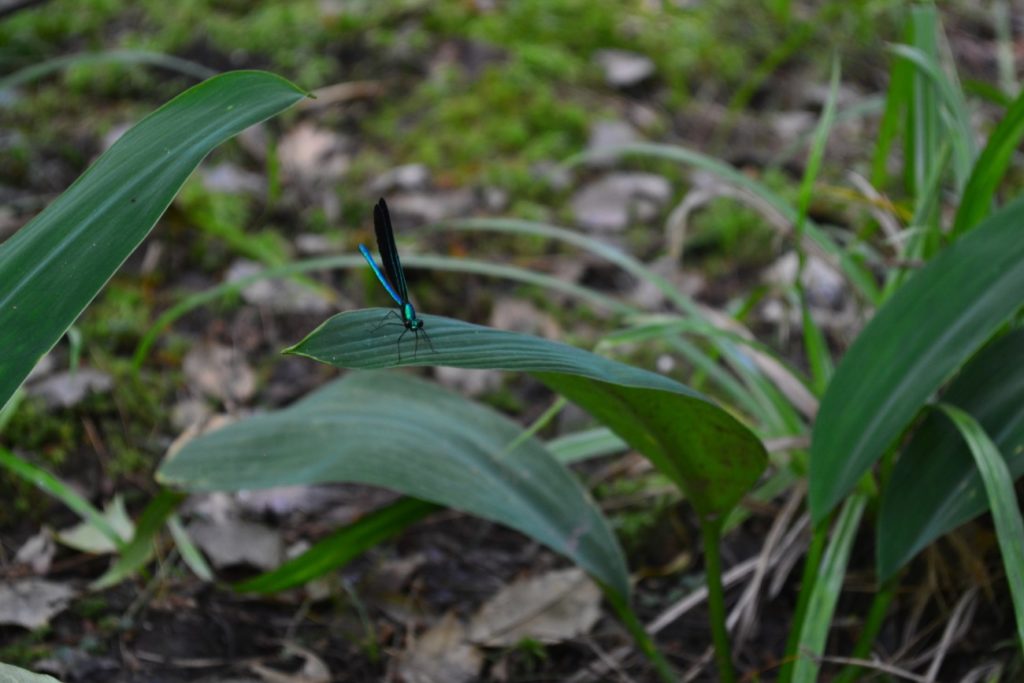 A common sight during summertime, the dazzling appearance of an ebony jewelwing damselfly demands attention! It can be seen flitting from leaf to leaf in search of a mate. Females tend to lay eggs in slow-moving streams and wetland areas, while males are known to stay close, guarding females to ensure others do not mate with her. 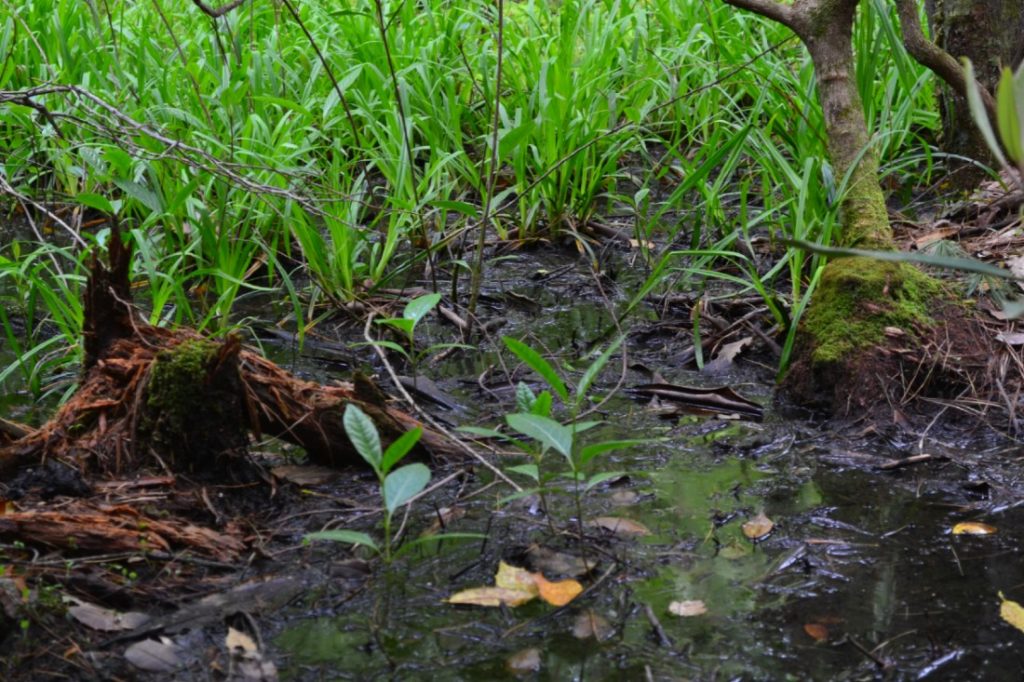 The bogs in our region serve as important ecosystems for a variety of unique and endangered plants and animals. Not only do they serve as valuable breeding grounds for amphibians, reptiles, and insects, but they also benefit humans. They filter out pollutants before reaching our waterways, provide natural flood controls, and prevent sediment from gathering in nearby streams.

While some people see wetlands as wastelands, they are vital habitats! Conserving Carolina is actively working to protect the bogs we have left and even restore bogs and other wetlands where they have been lost.

According to the U.S. Fish & Wildlife Service, an estimated 5,000 acres of bogs were once found in North Carolina. Today, only about 500 acres remain with most in poor or threatened condition. Many landowners are unaware of the treasures they possess. If you suspect you may have a bog on your property, contact the U.S. Fish & Wildlife Service to have a biologist take a look at it. If you would like to talk with us about how to protect natural resources on your property, call our Land Protection Director, Tom Fanslow, at 828-697-5777 x. 204 or email [email protected]