There is now more land in DuPont State Recreational Forest (DSRF), including clear trout streams, rare wildflowers and important wildlife habitat. On July 1, Conserving Carolina conveyed 315 acres to the N.C. Forest Service, south of the main body of DuPont. This is the second phase of the Continental Divide Tract—a long-sought conservation priority that provides the “missing link” between DSRF and a vast conservation corridor spanning over 100,000 acres. 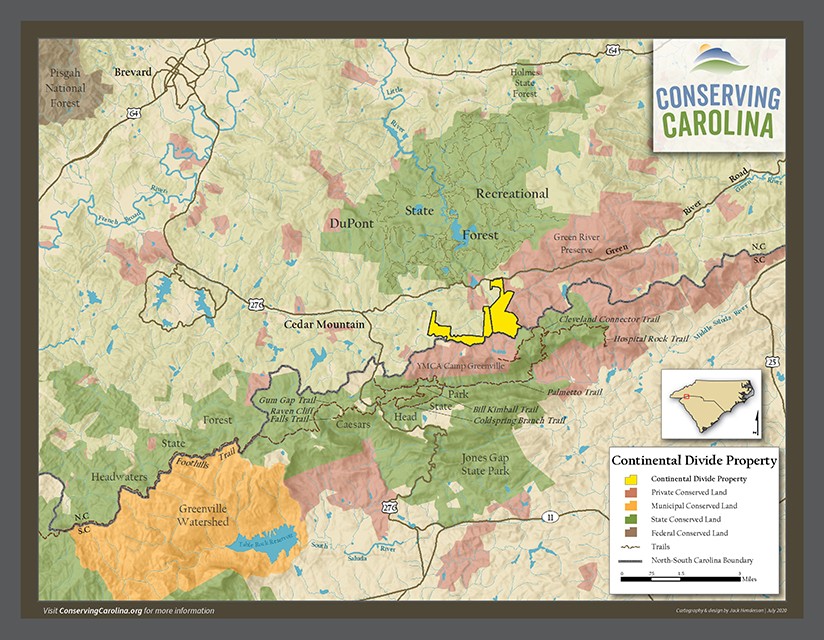 “In a region blessed with an abundance of public and conserved natural lands, DuPont State Recreational Forest is already one of our greatest conservation treasures,” said Conserving Carolina executive director Kieran Roe. “The incorporation of the Continental Divide tract will enhance it further by protecting water quality, preserving an important wildlife corridor and creating future opportunities for public recreation.”

The Continental Divide Tract expands this wildlife corridor, providing animals with vital habitat and room to roam. The corridor is located along the Blue Ridge Escarpment, home to some of the greatest biodiversity in the United States. In the face of climate change, this corridor gives plants and animals a chance to adapt by shifting their range—which may keep some species from going extinct. The Continental Divide Tract boasts high-quality trout streams, as well as at least nine plants that are rare or watch-listed in North Carolina, including yellow lady slippers.

While there is not public access to the Continental Divide Tract currently, the conservation of this important property creates opportunities to expand public recreation in the future.

Vital funding for the new 315-acre addition to DSRF came from the North Carolina Clean Water Management Trust Fund (CWMTF). According to Walter Clark, Executive Director, “Conservation of the Continental Divide Tract was a high priority for CWMTF. The project touches on the Fund’s mission of protecting water quality and natural areas, all while greatly expanding the area’s recreational assets.”

Other major sources of support for both phases of the project include the Open Space Institute, the Duke Energy Water Resources Fund, the Community Foundation of Western North Carolina, the N.C. Forest Service and private donations from Fred and Alice Stanback, Marilyn Westphal and Mark Simpson, and the estate of the late Maurice Loiselle. The project was also made possible by the previous owner, Gwinnett Industries, which sold the land as a bargain sale.

Conserving Carolina has been active in protecting DSRF since the 1990s, when the young land trust helped protect the first 7,600 acres of the state forest. Since then, Conserving Carolina and other conservation groups have added significant acreage to DSRF. With this latest addition, DSRF now spans nearly 12,500 acres.

Conserving Carolina is a local land trust that has protected over 45,000 acres, primarily in Henderson, Polk, Transylvania and Rutherford counties in N.C. and the Landrum, S.C. area. The mission of Conserving Carolina is to protect, restore and inspire appreciation of nature. Learn more and become a member at conservingcarolina.org.