A young conservationist travels to the monarch sanctuaries in Mexico

This winter, Alexla Perez-Sanchez made her first trip to Mexico since she immigrated with her mother when she was three. “This was my first time ever stepping back on the land which I was born in,” says Alexla, a 19-year-old early-college student at Blue Ridge Community College. In February, she went to Mexico on her own to meet family members and to see the monarch butterfly sanctuaries in the mountains.

Like Alexla, the butterflies are travelers. Even now, they’re crossing the continent on their tiny wings.

The millions of monarchs that gather in a few patches of high-elevation forest in Mexico fly for thousands of miles to get there—settling where the forests offer just the right conditions for them to survive the winter. Since Alexla’s visit, those butterflies have left the sanctuaries and begun fluttering our way. In early spring, they lay eggs that hatch into generation 1—the beginning of the monarch’s new year. Each year, it takes four generations to complete the circle of migration.

The first three generations live short lives—only a couple of months, with just 2 to 6 weeks as adult butterflies. Some of the monarchs are born here in the Carolinas, where we can see the striped caterpillars eating milkweed leaves and then the brilliant butterflies dining on nectar. Each generation picks up where the last one left off, continuing the journey north. Then, in early fall, the fourth generation is born in Canada or the northern U.S. Their lives will be different.

Those monarchs—generation 4—will live much longer and travel far further than their forebears. They will live as long as 8 months and fly across the whole continent, traveling south for over 2000 miles.

In September or October, we can see the monarchs migrating through the Southern Appalachian Mountains. They make their way back to Mexico around the Day of the Dead, where local tradition holds that the butterflies are the souls of the ancestors, returning. Amazingly, the monarchs know their way to the exact spots in the mountains where their great-great-grandparents found shelter.

At Home in Nature

On Alexla’s journey, after she and her mother settled in Hendersonville, she grew up mostly disconnected from nature, despite the abundance of parks and forest land in this region. She and her mother didn’t know where you could go for a hike and there wasn’t much signage in Spanish.

Then, for the last two summers, Alexla took part in Conserving Carolina’s Summer of Service, an AmeriCorps program for local 17-to-19-year-olds. Her experience working outdoors on trails, gardens, and nature preserves opened her eyes to the joy and peace she feels outdoors. Finding her home in nature, she says, was “soul-changing.”

In a recent video Alexla says, “That definitely changed my view on the whole ‘I have to separate my culture from this nature.’ It almost meshed into one, thanks to Conserving Carolina.”

Her experience awakened a passion for environmental work. This fall, Alexla will enroll at UNC-Asheville, studying communications with a concentration in film. Her goal is to pursue a career in conservation.

She also says that Summer of Service gave her important life skills. In Summer of Service, she was introduced to the practice of mindfulness, being open to whatever the present moment brings. And they kept returning to a theme brought up by the first Summer of Service coordinator, Tony Beurskens: Be willing to tolerate discomfort for the sake of growth.

“That was this trip!” Alexla says. “I put myself in a place of discomfort. And I could tell from the second I got off that plane that I was starting to grow in this new way that I had never felt before.”

“I went down there by myself, which was the best part,” she says. “I wanted to know who I am when I’m in this place literally thousands of miles from home and I don’t know anybody or anything except for the language.”

“There were so many emotions,” she says. “I felt this happiness that I had never received anywhere else in my life, but there was also this sadness because I knew that some of these people have never experienced some of the things I have experienced in my life. But, at the same time, I knew that I had also missed out on a lot of traditions and a big part of my culture.”

That culture is rooted in a spiritual connection to the Earth, she says. For example, her young cousins know stories and traditions from the Aztecs and other indigenous tribes. “They highly respected the earth. They used the land but they gave back,” Alexla says. “At the end of the day, that might even contribute to my passion for  the environment, because it’s pretty much in my blood to take care of the Earth.”

She and her cousins took a trip to Angangeo in the mountains of central Mexico, to see the butterflies. There, they hiked through conifer forests, with views out to craggy blue peaks. They reached 10,000 feet in elevation. At one point, signs call for quiet as you enter the sanctuaries.

“It sounded almost like a river because there were so many of them flapping,” Alexla says.

It still fills her with elation to remember the butterflies. Orange wings were everywhere, floating up through the trees, clinging to branches, landing on her skin and basking in the sun. 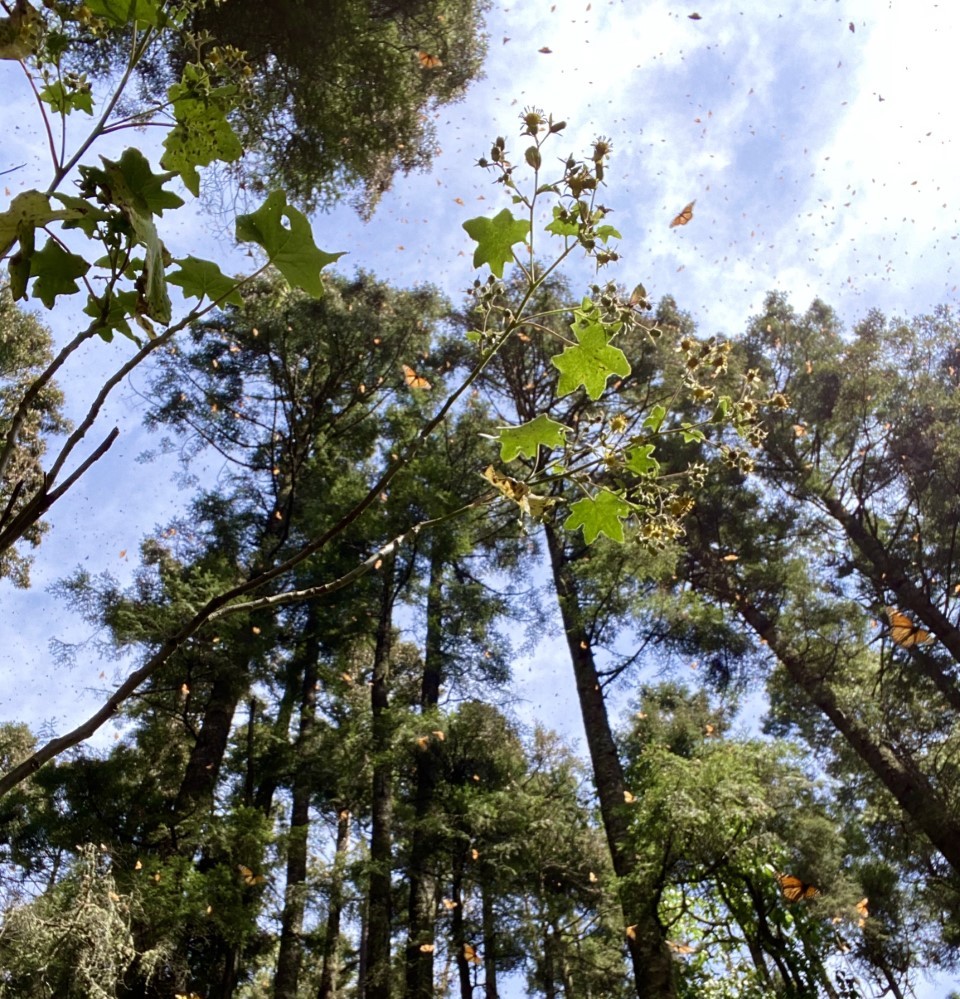 To Save the Monarchs

As miraculous as the sanctuaries that Alexla witnessed were, they were home to a very small population of monarchs. Monarch Watch recently released data on the 2020 overwintering population, which has dropped from last year although it is higher than the precarious lows of a few years ago.

In just two decades, monarch populations have plummeted by 90%, leading some to ask if the monarchs are on track for extinction. How did that happen? A major factor is increased herbicide use on crops that are genetically engineered to withstand the chemicals. Those herbicides kill milkweed—the only plants that monarchs can lay eggs on. In response, more gardeners are planting much-needed milkweed. That helps solve one problem. But there are other dangers.

Shortly before Alexla’s visit, two champions of the butterfly sanctuaries—Homero Gómez González and Raúl Hernández Romero—were murdered. They had risked their lives standing up to illegal logging and protecting the sanctuaries.

And climate change is a major threat. As temperatures rise, the fir forests where the butterflies overwinter could disappear—so conservationists are working to establish the fir trees at higher, cooler elevations. Still, the butterflies are vulnerable to a wide range of blows from the changing climate. Drought in Texas was a factor in this year’s low population. Violent winter storms are increasingly common in Mexico, with the potential to destroy the butterflies while they’re concentrated in small groves of trees. Higher carbon dioxide levels are increasing the toxicity of milkweed, which monarchs have evolved to tolerate—but only to an extent.

In a recent Washington Post article, Chip Taylor, the founder of Monarch Watch and a professor at the University of Kansas, says, “The migration will disappear unless we solve climate change.”

We still have the chance to save monarchs. Stabilizing our climate is a daunting task, but the reward is a life-sustaining planet. And the monarch migration is a phenomenon that sparks so much wonder, it’s impossible to give up on it. For Alexla, the butterflies are also an inspiration.

She says, “It gives you hope, you know? If you’re ever having a bad day or you ever start doubting yourself—just think, if that little one, that little thing made it that far, who’s to say you can’t do whatever you put your mind to?”

This article is written by Rose Jenkins Lane as part of our our monthly Stories of the Land series which runs in the Hendersonville Times-News. These stories explore people’s connection to the land and the ways they give back to the places they love.

Tags: Children and Youth, Diversity in the Outdoors, Henderson County, Summer of Service