A Summer Working in Nature 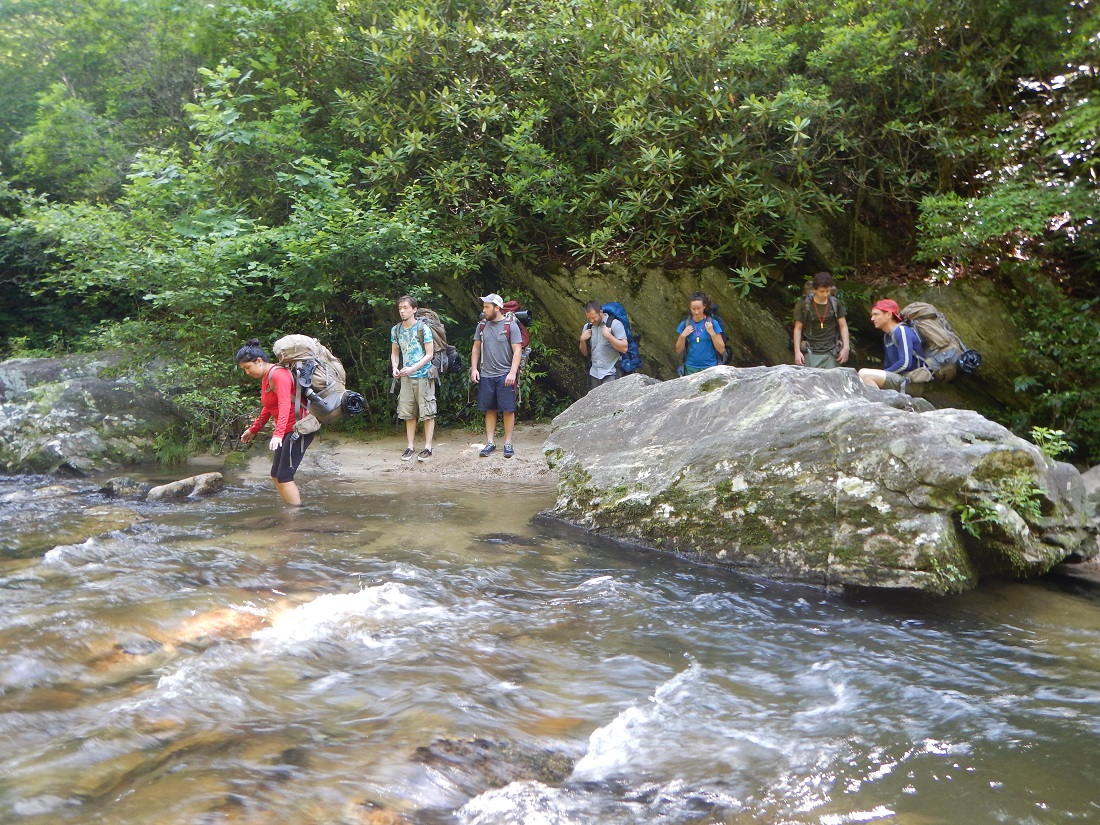 Two teenagers in Summer of Service do hands-on work to help the Earth and find it life changing.

Ana Martinez wanted to be more outdoorsy. But her mother tends to worry about insect bites or kids getting dirty, so she would keep them inside. Her dad is a different story. He’d try to get them out in the garden. “I really liked the idea of going camping, going backpacking, doing all this outdoor stuff,” Ana says, “but my mom was not about it and my dad was working all the time.”

Ana, a rising senior at East Henderson High School, found out about Conserving Carolina’s Summer of Service through AIM Cub—a group that helps students from immigrant families prepare for college, including community service. Summer of Service is a local AmeriCorps program for 17-19 year olds. Participants work on conservation projects, from improving trails to building a nature playground, while exploring personal growth and career directions. Ana knew the program would help build her resume for college. It paid. It came with an education award. And she’d be working outdoors, in nature.

But she didn’t go for it. “I was shy,” she says. That made the small group structure intimidating. She wouldn’t be able to hang back, unnoticed, and let other people talk. She let the deadline pass.

But, her friend, Alexla Perez-Sanchez insisted. Alexla was joining the program and she convinced Ana to contact the program director, Tony Beurskens, and apply after all.

Ana interviewed but she screwed it up—or it felt that way. “I went home and was like, ‘Yeah, they said they’ll call me, but they lied.’ Then I got the call, it wasn’t like, ‘Sorry.’ It was like, ‘Congratulations, you got in.’”

“I was really nervous,” she says. “Like what have I gotten myself into?”

Jordan Kirkland used to spend his free time indoors, playing video games or watching TV. Until he was eight, he was an only child. “And I lived with my grandparents, so I was really spoiled,” he says, with a smile.

Last year, as he was about to graduate from North Henderson High School, he reached out to Conserving Carolina about a senior project. Afterward, his project advisor suggested he join Summer of Service.

“I didn’t realize how much I would love it,” Jordan says. “Every day was just an awesome experience to wake up and be excited to come to service. This was the first time I did a service project—a heart project—and just seeing the physical results was way more than enough to realize that I love doing this. The majority of my family are construction workers, so I am a very hands-on kind of person.”

“I did a 180,” he says. He had been planning to study to become a veterinarian or a psychologist. “I realized, ‘No, this is what I want to do,’ because every day I was happy—even if it was cutting invasives like multiflora rose. It’s everywhere and it’s prickly and it’s terrible. But at the same time, I wouldn’t want to have any other job.”

Jordan signed up for a second Summer of Service term this year. The program started in June, with six participants. They came from different high schools; one was a home schooler; some had graduated; and one was in community college. Three were Latino, three white. Three were women, three men.

Most of them didn’t know each other.

“It was very quiet and awkward,” Ana says. Eating lunch the first day, there were long silences.

Then, they went on a three-day backpacking trip. The teenagers walked 15 miles with heavy packs, in the heat and humidity. Jordan got sand in his shoes that rubbed his feet raw. They missed a turn and had to backtrack a mile, uphill. And they loved it.

They hiked to waterfalls and swimming holes, surrounded by wilderness. Ana wasn’t sure about getting in the river, but she did. “It felt really good,” she says. “It’s crazy how it’s just there, in the middle of a forest. I’d never seen that and it was really cool.”

At their campsite, she was in charge of hanging the food, away from bears. “There were so many knots in that and I felt embarrassed to ask Tony, ‘How do you do this knot again?’” she says. “It’s pretty cool when you get it done. You feel empowered, I guess, because you did it by yourself. Your parents aren’t around and you’re with a bunch of strangers that you just met and it feels good.”

After the trip, Jordan and Ana say, everyone felt like friends. “We’re getting to be pretty tight,” Jordan says.

Discomfort for the Sake of Growth

You might find the Summer of Service crew knee-deep in a bog one day, splattering mud as they pull out cattails. The next day, they’re treating hemlock trees to save them from woolly adelgids. Or they’re working in town, turning the front yard of El Centro into a pollinator garden. On other days, they’re learning life skills like mindfulness—being present with your experience, however it feels.

Jordan says that much of the program can be tied together by a piece of advice that Tony, the program director, shared: Be willing to tolerate discomfort for the sake of growth.

“It is very hard work,” he says. “It is going to strip you of your ego. It’s going to beat you down and force you to sometimes ask for help. You realize that you can’t do everything alone. But at the same time, the rewards are so worth it, just seeing the physical progress. Seeing what you can do.”

Jordan says he wants to model that for his two younger sisters. “I want to show them that it’s okay to take the hard way, because hard work builds character.”

He’s gaining a sense of independence, too, including his determination to follow his ideal career path, doing hands-on stewardship of natural resources.

And he’s discovered how tied he is to nature. “Before, I didn’t really go outside,” he says, “but after this I just need to go outside, so I’ll go to Pisgah or somewhere else and I’ll just hike.”

What Is Giving to Us

Ana found her voice. “I learned how to introduce myself and keep a conversation going,” she says. “Before, when it came to introducing myself, I didn’t know what I should say, I didn’t know if I should shake their hand. Now I feel like it’s such a habit.” She feels confident now that she can present herself well in a college interview or a job interview.

She’s grown in other ways, too. “My brother says ever since I started this job it’s changed me, because I’ll say, ‘Stop, that plant’s invasive.’ Or I tend to think in more eco-friendly ways. I’ll be like, ‘Okay, I’m not using straws anymore.’ Or ‘We should just switch to paper bags instead of plastic bags.’

There’s something about it that makes me want to be more friendly to the Earth. I think it’s from working with the Earth. You go out there on those hiking trails and there’s beer cans and trash and straws and you see all this stuff that could ruin what is, like, giving to us. It really did change me.”

This article was published in the Hendersonville Times-News as part of our monthly Stories of the Land series.

Tags: Children and Youth, Diversity in the Outdoors, Summer of Service