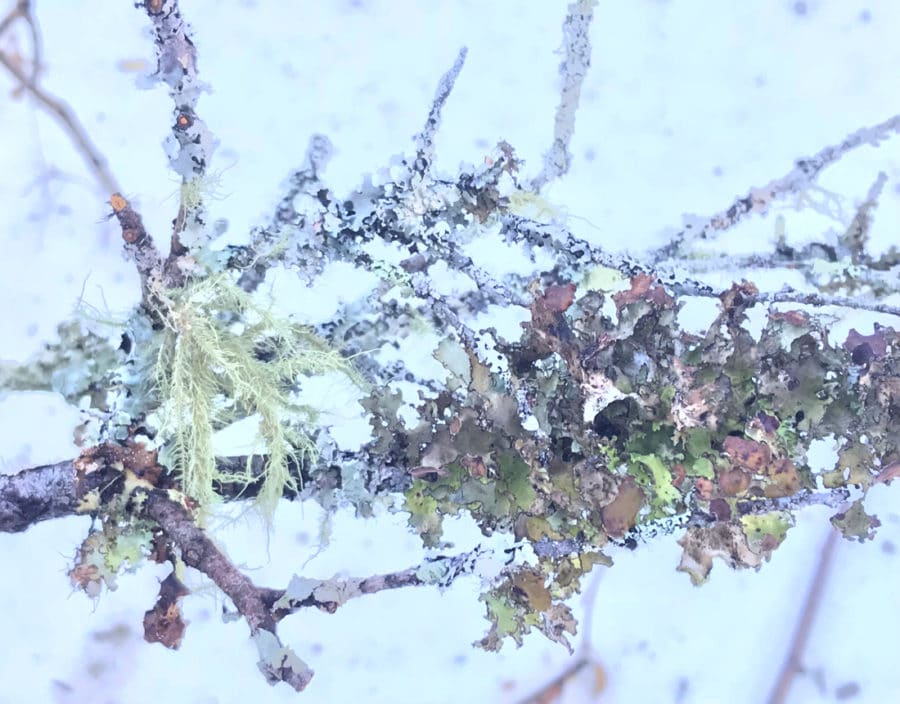 Two days after the heavy snows in December, Mattie Decker was without power at the top of a steep uncleared drive, on a mountain in Bat Cave. Her kitchen counters were loaded with groceries, a dish drainer heaped with apples, a cold roast nestled in a crock pot. A small stove offered warmth to one room. Her tiny dog, Izzy, wore a sweater.

Outside, sunlight had made its way over the mountain and was lighting up snow crystals. “Look at those diamonds in the snow!” Mattie exclaimed. The blue in the snow was harder to see, just then. Mattie had recently returned from Finland, where she learned to see a cool blue light in the shadows of snow.

Mattie is an oblate—a layperson affiliated with an order of Episcopal nuns, the Sisters of the Transfiguration. For over a century, the sisters have owned land on the mountain, which they protected three years ago with Conserving Carolina. When she’s not in Finland, Mattie lives in the sisters’ retreat house. She’s a writer, a historian, and a poet. She’s a professor of education—partly retired, but still teaching online classes. She practices Zen meditation, and she teaches mindfulness.

In Finland, this year, she learned about forest bathing. It’s a practice from Japan that has been gaining attention in the West. Forest bathing is not about getting exercise. It’s not about hiking to get somewhere. It’s about being present in the forest, taking it in. In Japan, forest bathing is offered as medicine and studies support its health benefits.

“Don’t your senses feel sharper?” Mattie asked in the snowy woods. If you were there that morning, you might have seen the brightness of the landscape through trees, sun shining off of snow. You might have felt the cold, fresh air as you breathed in. You might have smelled the resin from trees that broke in recent storms. You might have heard springs gurgling, water spilling into channels that curved through the snow.

Mattie says forest bathing is the practice of mindfulness in the presence of nature. “What that does, when you open up and you know more… you know, it’s endless.”

Mattie’s interest in mindfulness came out of her study of neuroscience, as an educator. She also drew on her experience with Zen.

“I was drawn to Zen because Zen cuts through everything,” she says. “What’s left is what’s real, what’s true, what’s here, what’s present. And, of course, that’s the core of mindfulness. Mindfulness is paying attention in the present moment, on purpose, without judgement, as if your life depends on it. Which it does!”

When she was living in Kentucky, near Morehead State University where she teaches, she saw a need to offer this practice to others. “I had students who were having such meltdowns that I knew I had to start a circle. So I started a Zen circle in my house.”

Then, too, she lived on a mountainside, in the woods. Deer would come up to the kitchen windows. Her home felt like a sanctuary.

“There is so much suffering in the world that we can’t do anything about,” Mattie says. “But there’s lot of unnecessary suffering that I know how to help, to help people have more inner control and more understanding. And I think that’s what’s driving me.”

Eleven years ago, after a relationship ended, Mattie needed a retreat. A friend recommended the Sisters of the Transfiguration, based in Cincinnati, in a convent full of beautiful trees.

On her retreat, Mattie entered a room near the library, where she met two of the sisters. Learning that Mattie was a writer, one said, “You can help me with my project!” She was working on a history of the community. Mattie says, “I was like ‘Oh! I would love to.’ It was amazing that I could be of use somehow.”

Mattie completed the book last year, but she continues to gather stories. Recently, she found a letter from 1916, about a harrowing night in Bat Cave as landslides thundered down the mountain. Suddenly homeless neighbors trekked through pouring rains to find shelter with the nuns—a dubious shelter since no one knew where the next slide might strike.

That story feels resonant since, just this spring, a huge landslide tore down a mountain near where Mattie lives, and buried Route 9 for weeks.

Back in Kentucky, Mattie loved her home in the woods, but she came to a point where she felt drawn… onwards. It wasn’t clear where she would go. She wanted to spend more time in Finland. She wanted to write. So, she sold her house. She stepped into the unknown, trusting.

She says, “I honestly truly believe—or experience, I’m now kind of moving beyond belief—I experience that when I’m courageous and I really show up, everything I need is present.” 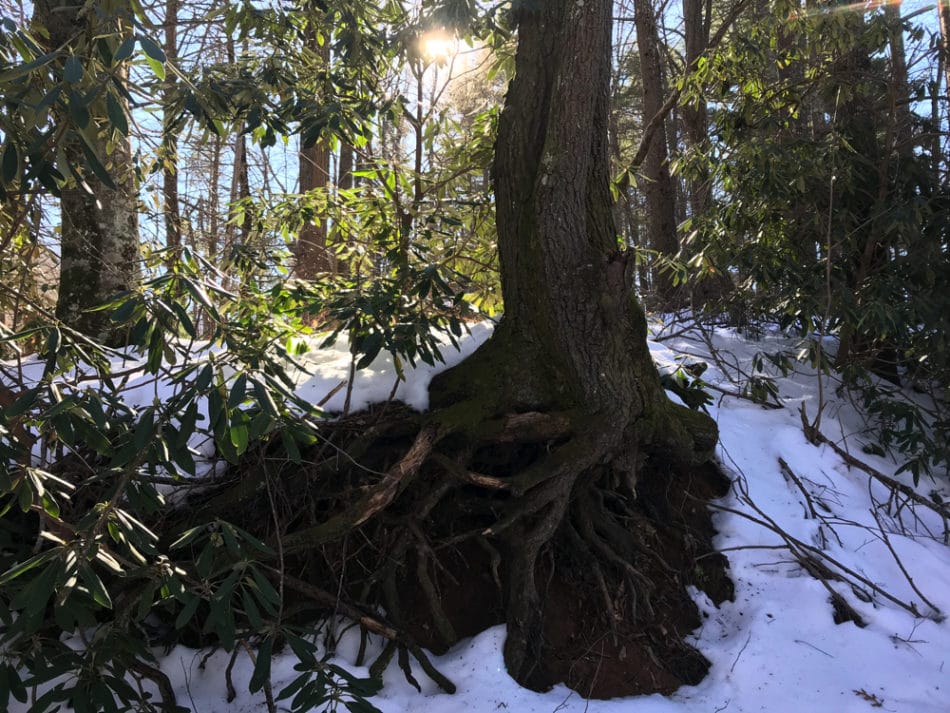 The nuns suggested that Mattie make use of their retreat in Bat Cave. She took up the offer with delight, arriving a year and a half ago. “I’ve lived in the wilderness before, but this is just so special,” she says.

The sisters protected their land in 2015, putting 410 acres under conservation easement and conveying ownership of most of that land to Conserving Carolina. Its steep slopes offer dramatically plunging streams and unique niches for wildlife. Since then, the reserve—called the Teaching and Research Reserve, or TARR—has welcomed scientists studying rare salamanders, college students doing field work, and foresters testing hemlock treatments. This spring, Mattie helped teach groups from Muddy Sneakers and Summer of Service.

Mattie is exploring the possibility of offering forest bathing experiences at TARR. In Japan, forest bathing retreats sometimes include walking mindfully through the trees, doing stretches, lying in a hammock, gazing at stars, standing under waterfalls, or immersing in hot spring waters. These experiences appear to lower stress and improve health.

In an NPR story on forest bathing last year, Dr. Phillip Barr of Duke University, said, “Medical researchers in Japan have specifically studied forest bathing and demonstrated several benefits to our health… from lowering blood pressure and heart rate, to lowering stress hormones, raising immunity, and in general, allowing the whole body to be in a more relaxed, healing state.”

Forest bathing may be coming to TARR this spring or summer. But you don’t need to wait for a guide. Mattie says the best way is to go into the woods by yourself, not even bringing a dog. “That way, you can be really present.”

This story is part of our monthly Stories of the Land series by communications director Rose Jenkins Lane, which is published in the Hendersonville Times-News. Upcoming activities, whether forest bathing or volunteer days or guided hikes, can be found on our calendar.