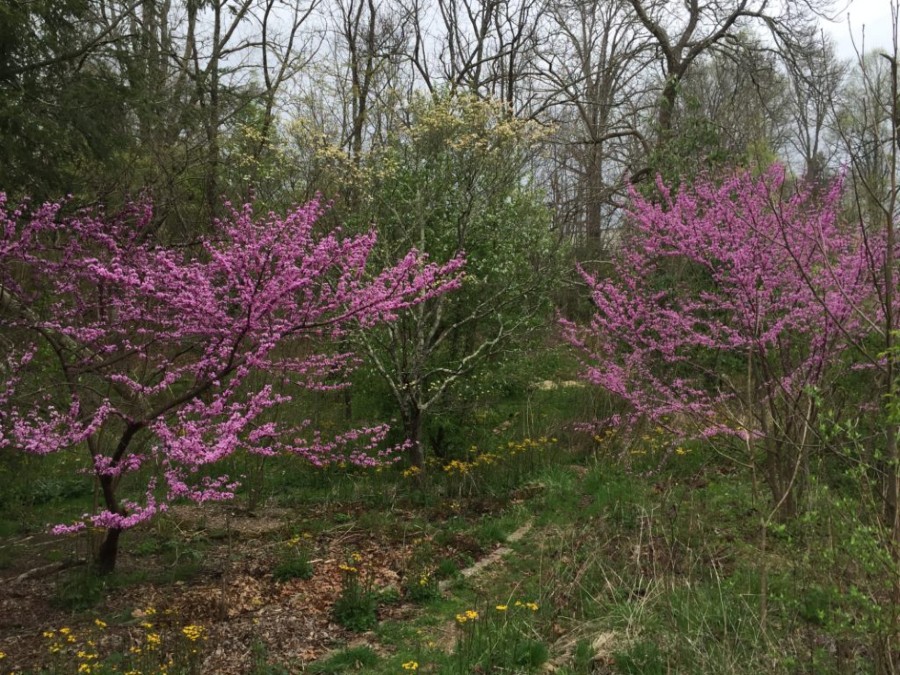 The story is a rerun but the photos are new from the spring of 2020! When our land protection director, Tom Fanslow, shared these beautiful pictures of spring blooms in the arboretum at our Hendersonville office, we decided to republish this Stories of the Land article, written by Peter Barr in 2015. Tom continues to nurture and restore natural habitat around our office—and it’s a beautiful success story about how much you can achieve in a small space. We’re republishing this article from our archives because it perfectly captures our excitement for spring!

Conservation in Our Own Backyard

Last summer, I was working late at the office of Carolina Mountain Land Conservancy [now Conserving Carolina] — perhaps in an attempt to make a newspaper deadline. (I recall, as usual, I missed it.) Tom Fanslow, CMLC’s longtime Land Protection Director, showed up unexpectedly at my door.

Fanslow frequently stayed late to volunteer in the common area of our nonprofit assembly in Flat Rock. Dubbed the Ironwood Square Community Arboretum, it is the land occupying the backyard of CMLC, the Children & Family Resource Center, and the Free Clinics.

He looked like he had seen a ghost. I was worried that something was wrong. I complied with his request to follow him to the backyard.

We stood there for about a minute in the increasing darkness of twilight.

And then all at once, the meadow, the forest, and the stream began to light up with a seemingly supernatural show of the most intensely bright and astonishingly spastic flickering of fireflies that I had ever seen.

I have seen blue ghosts in DuPont and the synchronous fireflies in the Great Smokies. These were different. The sight was surreal as Fanslow and I stood there in for some time, literally speechless, watching thousands of them.

It was one of the most magical experiences of nature that I had witnessed. It trumped standing atop mountains with nearly endless views, and it overshadowed feeling the power of water at the base of a 100-foot waterfall. Perhaps its brilliance was that it occurred in one of the most unlikely places.

I still don’t know what type of fireflies they were, nor does he. But what we do know is that they showed up for a reason.

“Build it and they will come,” I told him, referring to Fanslow’s small-scale community conservation project.

The significance in what we witnessed was doubled because we knew that experience need not be limited to only us. Rather, it could be available to anyone in the community through their own efforts of conservation in their own backyard.

Four years ago, Fanslow was gazing at a mature dogwood tree out the window from his CMLC office. He noticed it clinging perilously to an eroded stream bank. After particularly heavy rains, he watched the raging water cutting deep channels around the base of the tree, right before his eyes.

“This is ridiculous,” he recalled. “When I talk to landowners interested in conserving their properties, I talk to them about the importance of an uncut, vegetative buffer of at least 50 feet on each side of a stream.”

Fanslow was dismayed. “Here we are a conservation organization, and we weren’t protecting the land and water in our own backyard.”

“It was first all about water quality,”

said Fanslow, whose first effort was to cease mowing within 100 feet of the stream by the Square’s landscaping crew.

“Stopping the mowing allowed the nutrient cycle to regenerate in the soil,” said Fanslow. “It also finally allowed the property to begin holding water.”

Such a buffer prevents erosion of the stream banks and reduces the flow of sediment that pollutes the water. Trees and shrubs within this riparian zone keep soils intact, as well as act like sponges to absorb large quantities of water.

Streams and rivers with densely vegetated areas well beyond their banks are especially resistant to erosion, even during flooding.

Fanslow realized that not mowing simply wasn’t enough. He and volunteers planted hundreds of trees along the stream bank, including elderberry, river birch, black willow, red maple, and hazelnut, to transition the stream’s borders from a manicured lawn back to a natural forest.

After solely focusing on water quality, Fanslow expanded his mission to exercising an entire conservation ethic on the small property. “I thought ‘gosh, we could really do something here.’”

That something wouldn’t only improve the environment of the immediate land, but serve as an example of how everyone — urban, suburban, or rural — can become involved in conserving their own property.

Fanslow and volunteers began removing non-native plant species, which recreated natural communities on the site. A plethora of native species sprung up to take their place.

He supplemented them by the planting dozens and dozens of flowers, trees, and shrubs — many of which donated by volunteers.

During the next three years, Fanslow spent nearly every spare minute toiling in the Community Arboretum, constantly working to increase species diversity and add new types of habitat. In total, he has donated more than 2,000 volunteer hours to the project.

Last winter, police officers confronted him, responding to a report of a strange light behind the offices. That was just Fanslow working by headlamp, undeterred by the short daylight hours.

Once an unremarkable suburban lawn, now the Ironwood Square Community Arboretum is teeming with life. Dozens of types of trees, wide varieties of goldenrods and sedges, and even a diversity of aquatic vegetation like purple pitcher plants and cattails now flourishes.

Fanslow and supporters have learned that this small piece of land — it measures less than two acres — can have a big impact on important pollinating insects.

Pollinators like bees have been in rapid decline worldwide, a particular concern to the conservation and agricultural communities.

“One out of every three mouthfuls of food was pollinated,” explained Fanslow. “The Arboretum now gives insects a place to pollinate in a landscape where their opportunities to do so are far and few between.”

To the untrained eye, it may look unkempt.

“Someone suggested that it needed bush hogged,” Fanslow said, laughing.

Rather, the Community Arboretum features at least three separate habitats: a meadow, a recovering forest, and multiple pocket wetlands. It is as nature is supposed to look without human intervention.

“Consider that before we started, there were seven or eight species that could be found on this property. Now there are more than 300 species,” he said.

Fanslow is especially excited by two species of salamanders that weren’t seen previously but now reside in the stream.

“They are common species, but here in this suburban environment that is cut off from other natural areas, they’re quite uncommon. That’s something.

“We have elements of the wild kingdom here. We don’t have deer, turkey, or bear. But we have wild creatures in the form of insects, birds, and amphibians — which keep increasing with the different types of plants and habitats that arise.

“That’s the thing about this place. It’s small but there is a lot going on,”

said Fanslow, who hopes that visitors not just from the nearby offices but the entire community — including students and teachers from local schools — will stop by to observe the surprising abundance and complexity of nature on a small scale.

“I want visitors to go slow and pay attention to notice everything that is going on,” he said. “If you do, you’ll hear the catbird call ‘jowee, jowee’ or you’ll see the hummingbirds watching you.”

“You may just notice all the different colors and how the sunlight hits something at a different time of day. And you don’t have to go all the way to the national forest or park to see those. They’re right here.”

Fanslow explained that the Community Arboretum is a different way of thinking about conservation. “Small parcels — wherever they are — can have a big impact on the environment. All landowners can be involved in conservation.”

Recalling the glittering of those fireflies that summer evening, he smiled introspectively.

“We can literally achieve conservation in our backyard.”

CMLC has protected more than 28,000 acres of lands that you love — and need — along the Blue Ridge Escarpment, French Broad River Valley, Hickory Nut Gorge, and beyond since its inception in 1994. For more information and to support land conservation in WNC, visit carolinamountain.org.

This article is written by Peter Barr as part of our monthly Stories of the Land series. These stories explore people’s connection to the land and the ways they give back to the places they love. Peter Barr served as the Trails and Outreach Coordinator for then Carolina Mountain Land Conservancy, and currently serves as the Trails Director at Conserving Carolina.