From Gun Range to Conservation Land

Susan McHugh was at home when she heard the assault rifles—loud, continuous blasts of gunfire. It came from the property beside her home in Saluda, the site of a proposed police training center. Planned trainings at the site would involve paramilitary scenarios and automatic weapons. That day in 2018, the Henderson County sheriff’s office had come out to do sound tests.

“It sounded like it was right on my porch,” McHugh says. “I can’t even tell you how awful it was.” Their home in the Green River Gorge, adjacent to the Green River Game Lands was usually peaceful.

“I called the county manager and I said, ‘What are we supposed to

do for the rest of our lives? Close all the doors and the windows and put in earplugs? How do you live with this?”

Her friend Sara Bell called, upset. Bell owns The Gorge zipline where people come for a wilderness adventure, flying through stunning scenery. That morning on the zipline, you could hear gunfire. You could hear it in downtown Saluda, miles away. If you were in parts of the Game Lands to hike or paddle or hunt, you would have heard it.

So, the community organized. At public meetings, lines of citizens stretched out the courthouse door. Hundreds of people spoke out against the gun range. Even as they fought the gun range, the McHughs and their neighbors also started exploring other options for the future of that property.

Alex Harvey is a neighbor of the McHughs, a kayaker who owns 34 acres with access to the world class rapids of the Green River Narrows. He says the neighbors started asking, “What’s plan B for this property if it’s not going to be a shooting range? You can’t just say no to things.” If the sheriff’s office didn’t buy the land, it would stay on the market—then what?

People suggested that they reach out to Conserving Carolina. The proposed gun range property was adjacent to the Game Lands—so, could it be added to that public land?

McHugh, a Polk County native who is retired from a career in education, says they didn’t know what to expect when they reached out to Conserving Carolina. She, her husband Tom McHugh, Alex Harvey, Amos Dawson, Jay Bergen, and DiAnne Arbour met with Conserving Carolina’s executive director Kieran Roe and land protection director Tom Fanslow to explore the possibility of protecting the land.

Roe and Fanslow were willing to try, although it seemed like a long shot. The price for the steep, roughly 80-acre tract was $450,000. Where were they going to get almost half a million dollars?

“When they came to us, we had nothing to go on,” Fanslow says. Conserving Carolina could apply for state grants, but even if they got one, they’d need a significant local match.

“It was kind of like Stone Soup, you know that old children’s book,” Fanslow says. “We came into town saying, okay, we’ve got this empty soup pot. It doesn’t have anything in it though. And then people just started bringing their onions and tomatoes and radishes. And then we made this big bowl of soup that everyone could enjoy.”

Tom McHugh’s parents bought their farm in Saluda when he was just three months old. His father was a professor at Duke and each year, when school got out, the family would pack the car and head to their summer home.

“It was like a fantasy land,” he says. “We’d work in the garden in the morning and then we’d have the afternoon to go and play in the woods.” He and his brother, John, would chase squirrels, look for snakes, find salamanders, and play in creeks. There was no electricity on the farm until he was sixteen, so they used kerosene lamps and cooked on a wood stove, which was sweltering in the summer. They grew nearly all their food in the large garden.

McHugh says, “We rented houses for the school year but we owned the farm and that was a source of pride to us, and security.” Eventually, his parents retired to the farm, and later, it became his home with Susan.

The McHughs can hike from their house to the clear, rushing waters of the Green River in just over an hour—although it takes longer on the way back, up steep trails. They love the beauty of the wild river in the gorge and the mountain views near their home. The forests around them are full of turkey, bear, deer, coyotes, and bobcats. As in Tom’s boyhood, it’s a place of wonder.

But the McHughs don’t have children and they worried about their land: what would become of this special place once they were gone?

Now, as they looked for a conservation solution for the gun range property, they started thinking beyond that one parcel. What if they protected their land too?

Fierce opposition to the gun range succeeded in persuading Henderson County to drop the proposal. “The Commissioners came through in the end,” Susan McHugh says. “To their credit, they listened and they changed their minds. That speaks volumes when somebody’s willing to change their mind.”

By this time, the idea of protecting that property had gained momentum. DiAnne Arbour says, “The project pulled our community together. Our little neighborhood got so much tighter. I think we got to know each other better because we were fighting for a cause.”

Now the cause had shifted to conservation. They started adding ingredients to the “stone soup.”

Neighbors dug deep, donating an extraordinary $100,000 to help purchase the land where the gun range had been proposed. That local support influenced philanthropists Fred and Alice Stanback to contribute too.

Harvey found another way to add to the match for the potential grant. He offered to donate a conservation easement on 25 acres of his own, meaning he would permanently give up the land’s development potential.

Then, two neighbors, Annie and Randy Hall, offered to finance the purchase with a low-interest loan, allowing Conserving Carolina to buy the gun range property while it was still available.  An earlier loan from The Conservation Trust for North Carolina also provided timely funding.

With no grant lined up, it was still a risk, but Conserving Carolina bought the land in 2019. The nonprofit did go on to receive a grant from the NC Land and Water Fund (LWF). Finally, this fall, their goal of making the property public land became reality. In October 2022, Conserving Carolina transferred 76 acres to the NC Wildlife Resources Commission to expand the Green River Game Lands!

Paul Thompson, a biologist with NC Wildlife Resources, says, “This addition will provide permanent protection to the natural resources along the Green River, and will expand opportunities for game land users to enjoy wildlife related activities.”

And it turns out, that’s just the beginning.

At Conserving Carolina, Tom Fanslow has been putting together a complicated conservation puzzle—leveraging landowners’ generosity to secure state grants.

In the first phase, the conservation easement on Harvey’s 25 acres helped match the grant for the 76 acres that was added to the Game Lands.

Then, there’s another 50 acres that Karen and David Cook donated outright to Conserving Carolina. David Cook says that real estate companies had been reaching out to them about selling it. But, he says, “I wasn’t keen on the idea of allowing development underneath the view that we all enjoy up on the mountain. Then it came to my attention that there was an organization that we could donate the land to and receive a federal tax break. So, we decided that was a much better way for us to go.”

Then, add to that the McHughs’ land. The McHughs are willing to donate a conservation easement on 18 acres and sell another 125 acres to Conserving Carolina at a price well below market value. The goal is to make that 125-acre parcel a further addition to the Game Lands.

The money to purchase that parcel will come from a second LWF grant that was recently awarded. This grant also requires a match. In this case, the match will come from the Cook’s donated land and the McHugh’s donated easement. 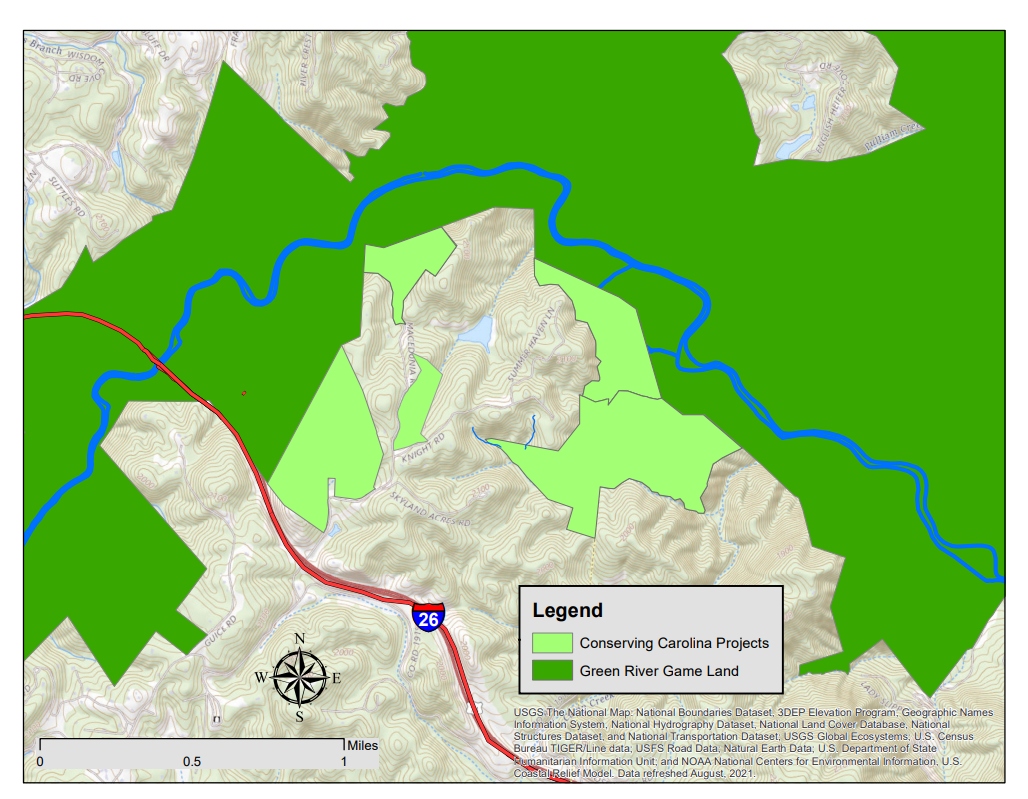 A Lot of Silver Lining

“It’s going to be a huge amount of protection in this one community,” says Susan McHugh, who now serves on Conserving Carolina’s Board of Directors. “All of these properties have flowing creeks. And all of that water that flows into the Green River, which we want to keep pristine.”

Harvey points out that they are preserving a wildlife corridor on the edge of the Game Lands. And for people like him who love to paddle—or hike, hunt, fish, bird, bike, or float—in the wild and beautiful Green River Gorge, there will be more room for recreation.

For Sara Bell, the zipline owner, the outcome saved her business and other local tourism and recreation businesses. “An outdoor shooting range would have been immediately detrimental to our business,” she says. “Imagine a Google review siting the sound of constant gunfire when folks are looking for a wilderness experience. Placing the land in conservation and increasing the acreage of the Green River Game Lands is a win for all parties involved.”

As Susan McHugh puts it, “There was a lot of silver lining to that gun range.” Surprisingly, the proposal that threatened to destroy their quality of life resulted in the opposite—protecting forever so much of what they love about their home.