New Life in the Cemetery 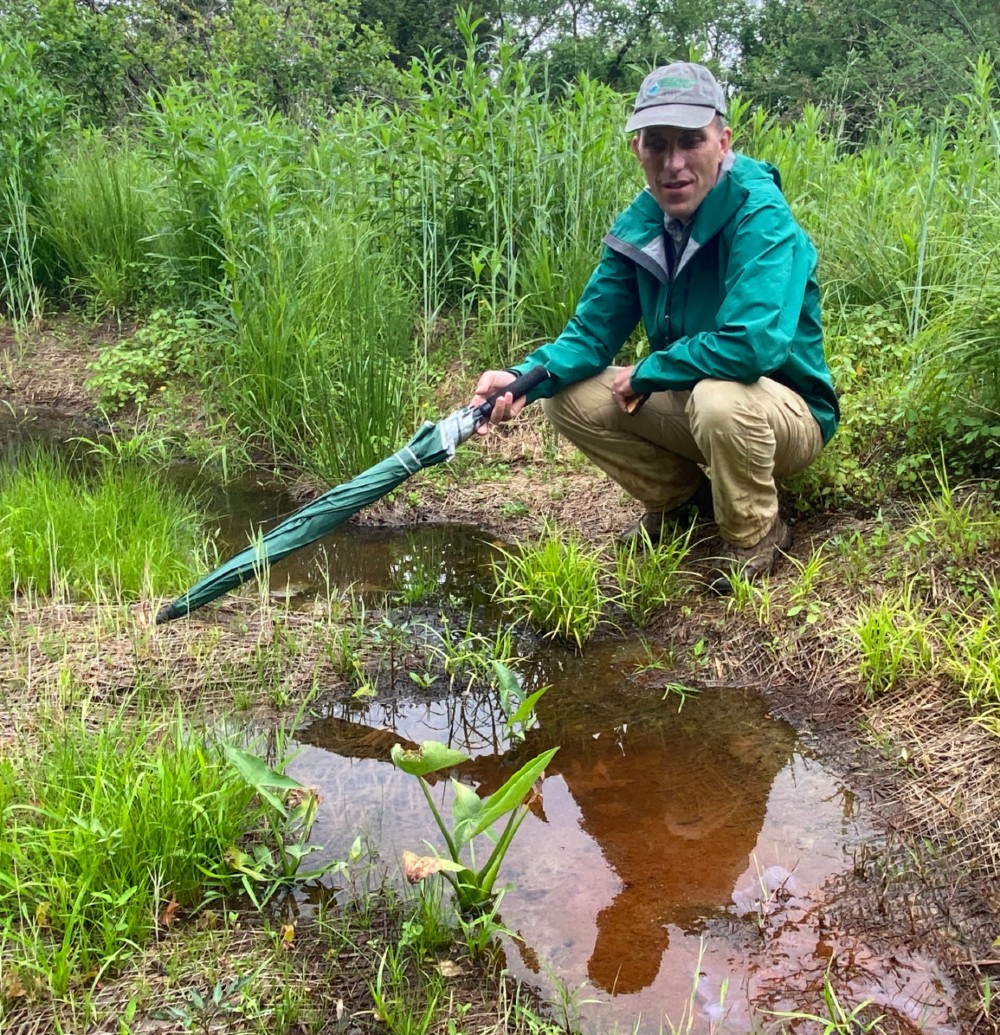 Shaun Moore is walking on the edge of a wetland, where lush plants are springing up. The leaves are a brilliant green, shining with rain. He stops. “Hey!” he says. “We didn’t plant this.”

It’s arrowhead, a plant named for the shape of its leaves. It’s a plant you might expect to find in a wetland—but not this wetland, which wasn’t here a year ago. Shaun is the owner of a small environmental restoration company, SM Soil and Water Solutions, and they just created this wetland at Carolina Memorial Sanctuary, a conservation burial ground in Mills River.

The arrowhead wasn’t here before, when this land was an abandoned farm field. And they didn’t plant it. So where did it come from?

It’s possible that it came from the past.

“What Am I Going to Do With This?”

When the sanctuary acquired 11 acres here in 2014, it was hard to see this as a place that could offer beauty and solace, a place where you might give your loved ones back to the earth.

It used to be a dairy farm, but it had been let go. The former fields were overgrown, choked with invasive privet, bittersweet, and Bradford pear. Vines were strangling the trees. “It was a jungle of invasive plants,” Shaun says. There was a stream that had been straightened into a ditch, lined with bamboo and kudzu that left no space for other life. That ditch ran into McDowell Creek, where the banks were severely eroded. They had turned into cliffs of dirt that kept collapsing and dumping sediment into the water. That lost soil flowed downstream into the French Broad, polluting the river.

Caroline Yongue, who founded the conservation burial ground, recalls that, early on, “There was kind of a freak-out for me, like, ‘Holy crap, what am I going to do with this?’”

But one of her gifts, she says, is to envision change. (See Caroline’s story.)  She brought in Shaun to help create something new—or, in many ways, to bring back something that had been lost.

There’s no record before 1957 of what this land used to be. But throughout the French Broad River basin, there used to be wetlands. They were full of life—supporting ducks, geese, songbirds, fish, salamanders, turtles, frogs, beaver, otters, deer and many other animals.

The river valley also made good farm fields and most of the wetlands were drained or filled for agriculture. By 1957, the land that is now Carolina Memorial Sanctuary was a working farm. Some 60 years later, the farm was gone. Where it used to be, you could find wet areas that seemed like they might be remnants of a larger wetland.

Shaun dug soil cores to learn more, and found about 16 inches of red clay—what could be a layer of fill dirt. Below that were wetland soils. From an ecological point of view, he’d found a buried treasure.

“Some of our most biodiverse habitats in the Southern Applachians are wetlands,” Shaun says. “There’s a lot of flora and fauna that really like them. You also get what some people see as more practical things.

“You get a lot of stormwater retention, which reduces flooding downstream. Wetlands act as a filtration system. The water that runs there gets cleaned up by all the vegetation and the soils. And, you get more groundwater recharge into the aquifer by having water sitting there instead of running right off into streams and leaving the land quickly.”

Restoring a badly eroded stream or a buried wetland is a major undertaking. Fortunately, Conserving Carolina, a local land trust, was able to secure two grants for an ambitious restoration—one from the N.C. Clean Water Management Trust Fund and another from the N.C. Department of Environmental Quality. The Town of Mills River provided support for the grant applications. The sanctuary also invested its own funds to restore the land. And the sanctuary worked with Conserving Carolina to place the green cemetery under conservation easement, ensuring that it will remain a natural habitat forever.

The project was also helped by good neighbors. Barkwells, a dog-centric vacation retreat across the stream from the sanctuary, allowed part of the stream restoration to take place on their land. Barkwells also plans to donate a conservation easement to protect the natural buffer on their side of the stream.

Shaun headed up the restoration, which was no small task, from planning and permitting to the  boots-on-the-ground work. He and his crew cleared out invasives. They re-graded stream banks. They excavated the soil covering the potential wetland.

“One day, we were just digging away with the excavator and whooooo,” he says. “There was a spring, just like two garden hoses coming out of the bank.”

The basin they were digging soon filled with water.

Then there was planting—replacing monocultures of invasives with diverse native species. But, Shaun explained, “We’re not going to fill it all up with plants because by exposing that wetland soil, we probably exposed some seedbank that’s been buried. There could be stuff popping up that we haven’t seen for a hundred years. It’s been known to happen.”

It was after that, checking on the new growth around the wetland, that he made his discovery: “Look at all this arrowhead! We did not plant this.”

Love is Healing the Land

Cassie Barrett, who helps run sanctuary, says that people love to see its ongoing transformation— whether they’re visiting their loved ones’ graves, considering conservation burial for themselves, or coming to jog or walk their dogs. Like a park, the sanctuary is open for all during daylight hours. “It’s a place for life and for death,” Cassie says.

At the sanctuary, Cassie does everything from giving tours, helping families with burials, running the business, and even digging graves. She’s also the co-founder of the Center for Conscious Living and Dying. The center’s Facebook page states, “By increasing death awareness, we enhance living.”

This spring, you could already see changes at the cemetery. In early February, just two months after the wetland construction was done, jelly-like bubbles with dark spots appeared in the shallow water—wood frog eggs. Soon the eggs were wriggling tadpoles, then ribbiting frogs. On the day that Shaun found the arrowhead, he also spotted a red salamander. In the sky, swallows were circling. In the tall grass, a mallard nest cradled eggs.

To Cassie, renewal comes not only by letting springs pour into pools and long-dormant seeds come to life. It also comes through the love that goes into the burials. “I do think the burials help heal the land,” she says.

“The way this land feels has changed dramatically from when we were first here,” she says. “Before, it felt like you would expect it to feel because it had been neglected for so long—it almost had a slight hollowness. But now I think when people come here they can feel all of the love, whether it’s the love that goes into the burials or the love that’s been put into the land, restoring it.”