English Ivy: What Can You do to Control This Invasive Vine? 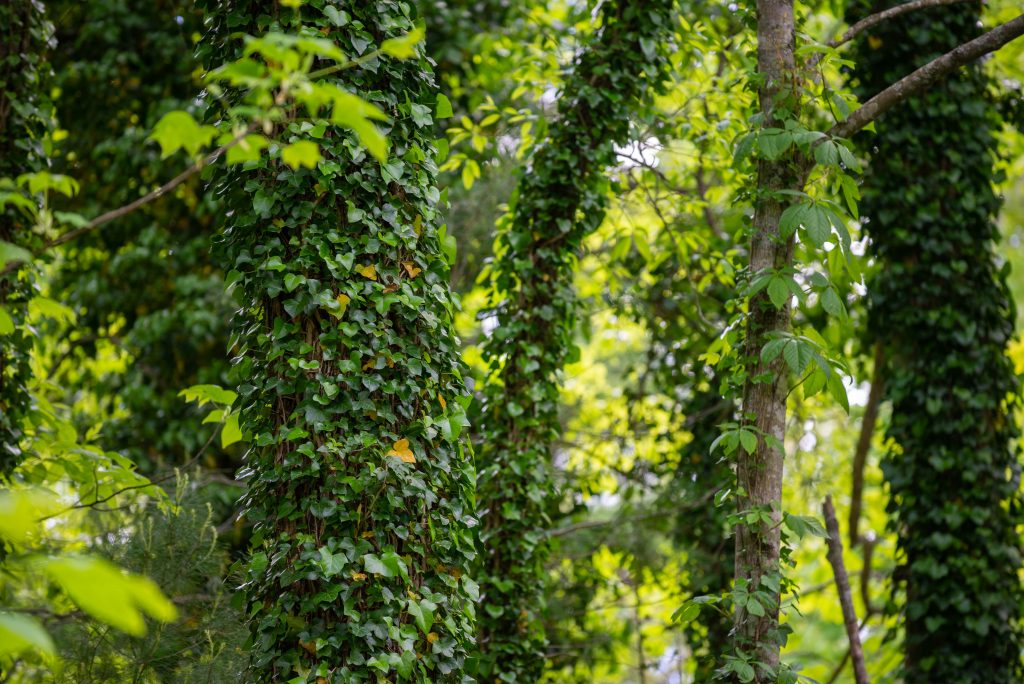 “English Ivy Kills Trees.” Ashevillians may remember these signs stuck near I-26 in recent years, a product of a passionate gardener, perhaps, who had seen too much ivy spread in the region, choking out native trees. We know it’s bad for trees, but how do you identify it, and, more importantly, get rid of it? We asked Americorps Project Conserve member Laura Anderson about how to get rid of this invasive vine so native plants can flourish.

How to Identify English Ivy

There are several different variants of non-native, invasive climbing ivies. From English to Persian, these ivies are described by their place of origin, but share many similarities physically and functionally. Generally, English ivy is our most common in North America. It has lobed leaves that grow alternately along climbing or trailing woody vines. Their color and size are variable, but are typically broad-leafed, no more than 4 inches long, and dark green with light-colored veins and a glossy finish. The vines are woody with advantageous, hairy roots, that grow into tiny crevices and tightly attach themselves to any surface. 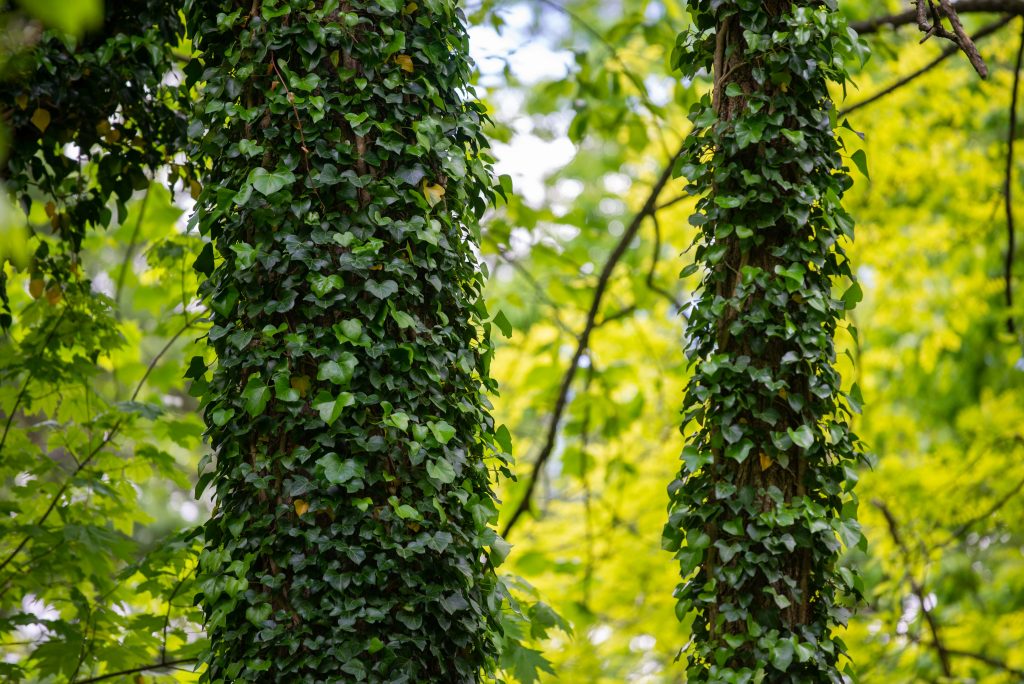 Immature vines have more distinct, triangular lobes, while mature leaves tend to lose their lobed look. Vines can stay immature for many years, only reaching maturity when certain levels of sunlight trigger this development.

These vines are evergreen, making them stand out, so they are easy to identify during the winter months.

Mature vines produce small, inconspicuous flowers from September to November, and fruit during the winter, producing round, dark blue and black berries.

Is English Ivy Invasive? Why is It a Problem?

English Ivy is a popular ornamental due to its fast growth, hardiness, easy care, and ability to stay green throughout the winter. These vines are able to thrive in shady locations, producing vines that can reach 100 feet long, covering the ground and growing up trees, walls, and trellises.

The ivy’s quick growth makes it popular with homeowners, but is also why this plant is so invasive. It quickly covers the ground in a mat of vines, excluding native plants from growing. Its shallow roots, typically only reaching a depth of four inches, barely holds the soil in place as they choke out the deep rooted, native plant life. This ivy climbs up trees, attaching itself tightly to the bark. This tight squeeze reduces the tree’s ability to transfer nutrients, continue outward growth, and adds immense amounts of weight onto the tree, increasing fungus and decay, and ultimately killing trees over time. The tree’s root systems are excellent at stabilizing the soil, and replacing them with shallow-rooted ivy increases the threat of erosion and landslides. The ivy’s tight grip also causes structural and aesthetic damage to walls and fences.

How do I Remove English Ivy?

The good news is that you don’t need any chemicals to get rid of this invasive plant. Ivy can simply be cut off of trees and pulled out of the ground, although this is hard work if you have a large area covered in ivy. To keep it from growing back, you need to completely remove the roots. Use a trowel or your hands to dig a few inches into the soil to find the buried roots that run horizontally under the soil and pull these out. After you have removed your ivy, keep an eye on the area for any sprouts that are coming up from a root you may have missed. Simply pull these out to complete the job.

You can also cut the vines that are climbing trees or structures and then repeatedly mow the ivy on the ground, slowly reducing the plant’s energy storage.

Cutting English Ivy Off of Trees or Buildings

When the vines are growing up trees or structures, cut through the vine as low as possible with pruners or a saw. The vines above the cut will die over the next week or so, and the vines below the stump should be hand pulled from the ground or removed through digging. If you want get the vines off of the tree or structure, use a tool like a flathead screwdriver, to pry the vines off.

What to Do With English Ivy Vines After You Remove Them

This plant has the ability to reproduce from its cuttings, so take care to pile them up on a tarp until they have completely dried out. Removal is best during the winter when it is easy to identify the plant and causes the least amount of damage to the other dormant plants in the area. Removal can be tedious when you lack a lot of extra hands or have an extensive infestation in the area, but it is rewarding work.

If you’re looking for a beautiful ground cover, there are many native alternatives to English Ivy. Here is a guide to native NC groundcover plants put out by the NC Native Plants Society that provides an overview of your many choices.

For native vines, check out these options:

You will see a huge difference in your yard and garden when you replace invasive English Ivy with native plants! Your trees will be healthier and the native plants you grow in place of English Ivy will support many more pollinators, butterflies, and insects, which means you will also see more birds and other wildlife.