Last month Conserving Carolina entered into a contract to purchase 81.5 acres of property on Macedonia Road north of Saluda, land targeted by Henderson County in 2018 as the proposed location for a regional police training facility. The County’s proposal prompted a strong response from Henderson and Polk County residents in the Saluda area opposed to the concept. In May 2018, the County dropped its plans to purchase and develop the forested tract, which adjoins the North Carolina Wildlife Resource Commission’s Green River Game Lands.

In the wake of the scrapped training center proposal, a small group of local residents approached Conserving Carolina to explore the possibility of acquiring the land for conservation in order to forestall other development plans that might threaten the property in future. In early 2019 the property’s owners accepted an offer from the local conservancy, which is now working to raise the $450,000 needed to buy the tract that it hopes eventually to convey to the State of North Carolina for addition to the adjacent game lands.

To date, local contributors have donated over $70,000 toward the purchase. Conserving Carolina is seeking a total of $100,000 from local donors and is pursuing the remaining $350,000 from outside sources including the N.C. Clean Water Management Trust Fund. (To donate to this project, select “Macedonia Road” under Donation Purpose.)

“The enthusiasm, energy, determination and teamwork that we experienced with each person involved in the Save Saluda effort last year created the force which prevented the gun range from becoming a reality,” said Susan McHugh, one of the leaders of the local group formed in 2018. “With the support we are receiving from Conserving Carolina, our hope now is that the community rallies around the opportunity to preserve the beauty and the environmental value of this property for years to come”

The Macedonia Road property is entirely forested, with streams and wetlands that protect waters that flow into the nearby Green River. Its protection will add to the existing wildlife and recreational corridor located on the Green River Game Lands.  Addition of the property to conservation ownership will also ensure protection of scenic views from Interstate 26, which runs near the property’s southern boundary.

The Hendersonville-based land conservancy has been working on a series of projects to expand and protect the 15,000-acre Green River Game Lands, which straddle the Henderson/Polk county line in the area of the Green River Gorge, a rugged landscape of steep ravines, coves, and old-growth and mixed hardwood forest which boasts the some of the most popular whitewater rapids in the eastern United States.

In 2017, Conserving Carolina worked with Henderson County to acquire 69 acres on the western end of the Game Lands that is being developed into a County-owned nature park below Lake Summit to be named after “Chief” Frank and Calla Bell, pioneers of the region’s summer camp industry.  In 2018 it worked with Polk County and the Wildlife Resources Commission to add 900 acres to conservation at Little White Oak Mountain, on the eastern end of the Game Lands. Six hundred acres were added to the existing Game Lands and 300 acres are being developed into an expanded county park by Polk County Parks and Recreation department.

According to Conserving Carolina executive director Kieran Roe, “Acquisition of the Macedonia Road tract will enhance protection of the Green River, one of our region’s natural treasures, and the public land network that safeguards its wild and scenic character. Strong support of the project from our local community will do a great deal to improve our prospects for obtaining additional outside support.”

Saluda-based Saluda Community Land Trust assisted the grassroots effort to oppose the police training center in 2018 and is partnering with Conserving Carolina in raising funds for the land purchase. Conserving Carolina has through April 30th to raise the additional $30,000 in local contributions that it needs to proceed with the purchase. Those interested in supporting the project are invited to go to the organization’s website, www.conservingcarolina.org/greenriver, to learn more.

Conserving Carolina is a local land trust dedicated to protecting land and water, promoting good stewardship, and creating opportunities for people to enjoy nature. Learn more and become a member at conservingcarolina.org. 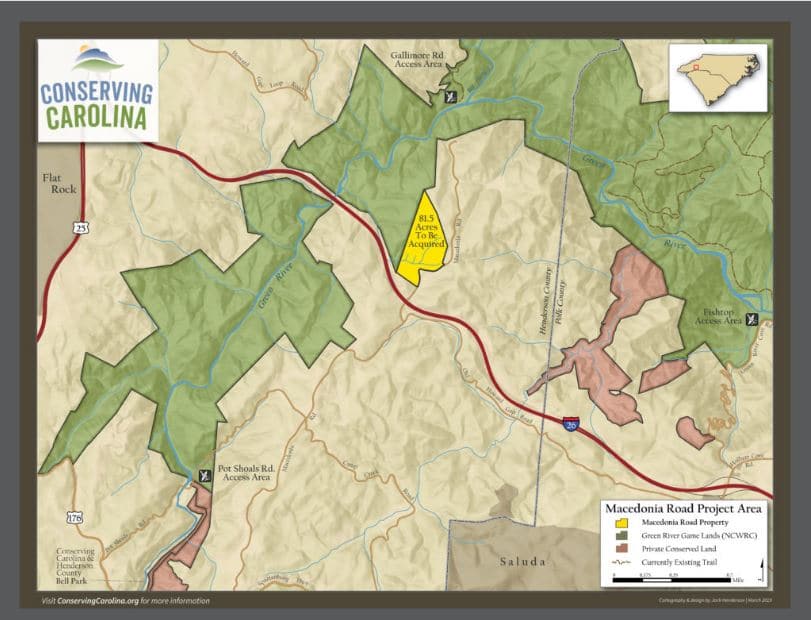