Conserving Carolina continued its storied conservation of the dramatic landscape of the Upper Hickory Nut Gorge (HNG) in 2013 with the acquisition of the rugged northern slopes of Little Bearwallow Mountain. The tract is spanned by a scenic band of cliffs and rock outcrops—including the prominent crag known locally as Wildcat Rock—that are highly visible from the Drovers Road Scenic Byway (US 74A).

Gerton landowners John Myers and Jane Lawson and Mary Beth Brock partnered with Conserving Carolina to complete this especially significant conservation project. Myers and Lawson worked with Conserving Carolina twice before—first on a conservation easement in the adjacent Hickory Nut Forest Eco-Community in 2006 and then to facilitate public ownership of the new Upper Hickory Nut Gorge Trailhead in 2012.

The tract not only boasts widespread conservation value for preserving biodiversity and natural scenery, its acquisition made possible the construction of a critical segment in the developing Upper Hickory Nut Gorge Trail, a hiking circuit that will one day link multiple conserved lands in the region. The nearly three-mile Little Bearwallow Trail, completed in its entirety in summer 2016, ascends 1.1 mi. to the 100-foot Little Bearwallow Falls, 1.9 mi. to scenic Wildcat Rock, and 2.8 mi. to near the summit of Little Bearwallow Mountain.

Click Here to enter your address and receive turn-by-turn directions to the access for the trailhead. GPS users may enter N35.4734, W-82.3320 in their units.

Off of US74A, a grassy parking area is most recognizable by a rock wall and stone chimney as well as a three-panel trailhead kiosk sign. The trailhead is also marked by a Henderson County Parks sign reading “Upper Hickory Nut Gorge Trailhead.” Park in the gravel lot in front of the rock wall, making sure to leave space for other vehicles. The trail begins on the other side of the highway marked by a single panel trailhead kiosk. Please use the new crosswalk for a safe crossing of the busy Highway 74A.

After enjoying the view and catching your breath at Wildcat Rock, hike back down the spur trail to main Wildcat Rock Trail. Turn left and continue on the Wildcat Rock Trail, descending slightly to traverse a boulderfield. After the rock hopping, begin a moderate climb that stays steady all the way to the end of the trail atop the ridgeline. Ascend rock stairs at 2.2 mi. (or 0.4 mi. beyond Wildcat Rock) where the trail switchbacks to the left. Soon thereafter, the climb enters a rhododendron thicket, ascending more stone stairs and passing a rock overhang at 2.4 mi. This rock formation usually hosts particularly sizable icicles in the winter! A brief respite in the grade follows the outcropping; continue on for an excellent view to the left looking north at Little Pisgah Mountain and Conserving Carolina’s Florence Nature Preserve. At 2.6 mi., switchback sharply to the right and continue climbing. After several more switchbacks that ascend through more rhododendron forest, the trail finally levels out and reaches its upper terminus at a scenic grassy meadow near the Little Bearwallow Mountain summit. Explore the meadow for good views of Bearwallow Mountain to the southwest. Return the way you came to the Upper HNG Trailhead. 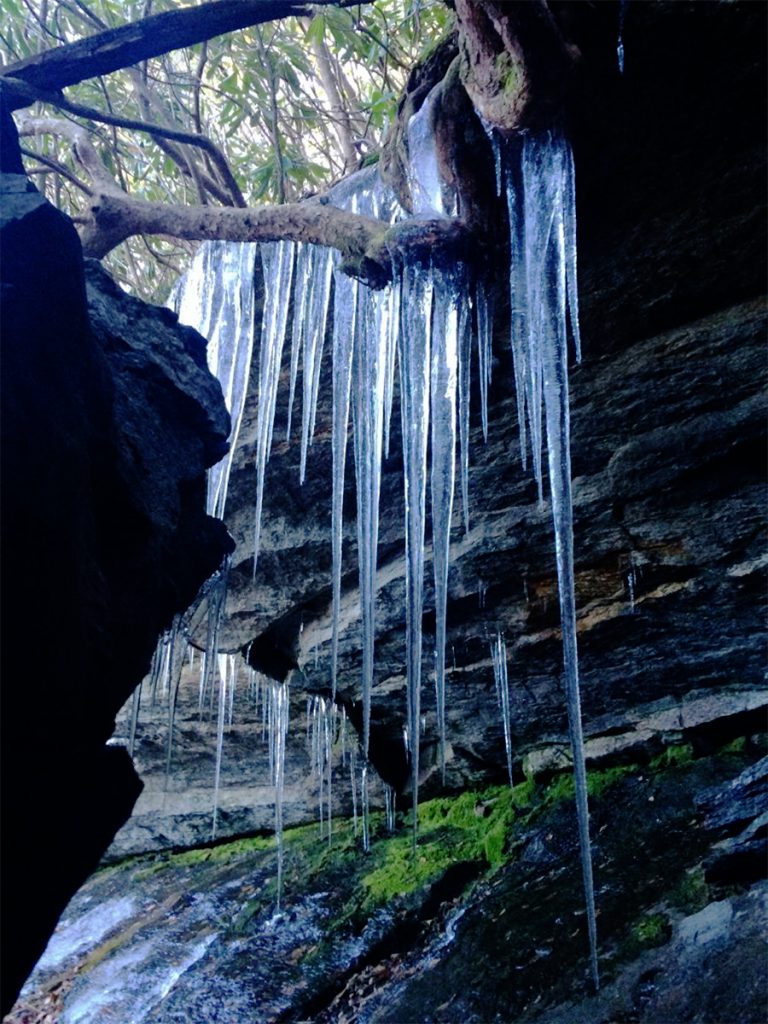