CANCELLED - Speaker Series: Hummingbirds - From Your Yard to Central America. . .and Back!

CANCELLED – Speaker Series: Hummingbirds – From Your Yard to Central America. . .and Back! 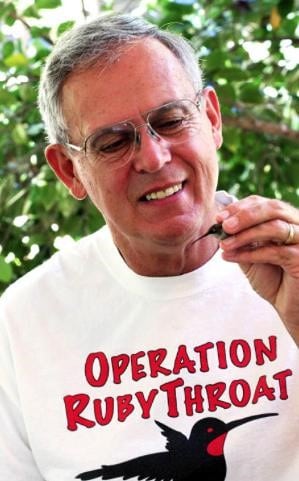 Ruby-throated hummingbirds are likely the most common hummingbird species in the world, but there is much to be learned about their life history—especially with regard to what they do the six months of the year when they’re not at our feeders and flowers in the Carolinas. Dr. Bill Hilton Jr., principal investigator for “Operation RubyThroat: The Hummingbird Project,” is the only scientist studying these hummers on the other end of their migratory path in Central America. During his presentation, Dr. Hilton will share some of the exciting results of his 30-plus citizen science hummingbird expeditions to the Neotropics, followed by time for questions and answers about these amazing little birds that break all the rules.

Dr. Bill Hilton Jr. was twice named South Carolina Science Teacher of the Year and was honored as the state’s Outstanding Biology Teacher. In December 2008 Discover magazine cited him as one of “50 Best Brains in Science” and one of ten top amateur scientists in America. His undergraduate major in philosophy from Newberry College was excellent preparation for his advanced science degrees from Winthrop University and University of Minnesota.

Dr. Hilton is based near York, South Carolina, at Hilton Pond Center for Piedmont Natural History (www.hiltonpond.org), a 501(c)(3) non-profit research, education, and conservation organization he founded on family property in 1982 and has served since as Executive Director. An active field researcher, Hilton has banded more than 69,000 birds of 127 species during 38 years just at Hilton Pond. He is one of only about 200 people authorized to capture wild hummingbirds and has banded and released 6,000-plus Ruby-throated Hummingbirds at the Center since 1984, with 3,000 more captured elsewhere. He also investigates other aspects of natural history, from pollination to predation and ecological succession to environmental change.

During the past 15 years Dr. Hilton has led more than 260 U.S., Canadian, Swiss, and Costa Rican citizen scientists on 30 Neotropical hummingbird field expeditions to Central America–all as part of his “Operation RubyThroat: The Hummingbird Project”(www.rubythroat.org).

“This Week at Hilton Pond,” Dr. Hilton’s on-going series of photo essays about nature phenomena in the Carolina Piedmont, has a large international following; more than 690 installments are permanently archived on-line.