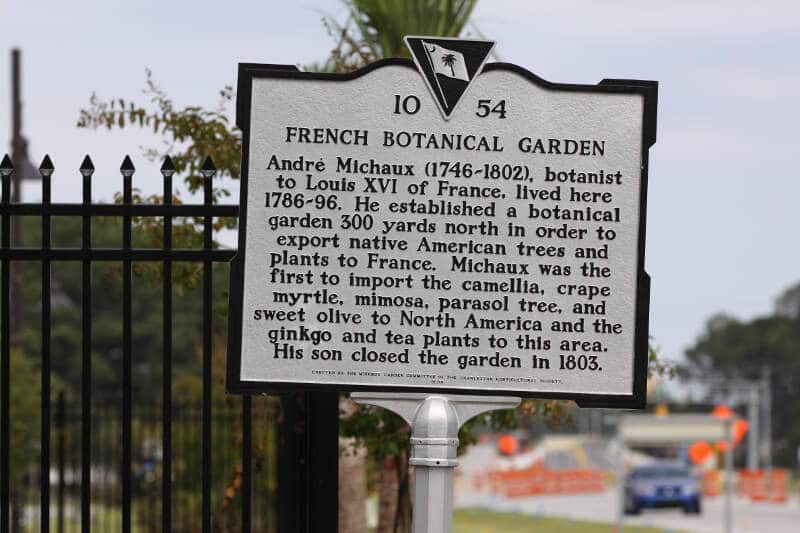 Due to the current health pandemic, all Landrum Library in-person, indoor events are cancelled through December 31st.

Known to today’s biologists primarily as the “Michx.” at the end of more than 700 plant names and to historians for his part in the Genet Affair, André Michaux was an intrepid French naturalist. Under the directive of King Louis XVI, he was commissioned to gather and grow American plants and ship them back to his homeland in order to improve French forestry, agriculture, and horticulture. He made major botanical discoveries that he published in his two landmark books, Histoire des Chênes de l’Amérique (1801), a compendium of all oak species recognized from eastern North America, and Flora Boreali-Americana (1803), the first account of all plants known in eastern North America.

To carry out his mission for the French government, Michaux traveled from the Bahamas to Hudson’s Bay and west to the Mississippi River on a series of journeys that are indicated on a finely rendered, color-coded map in this volume. His writings detail the many hardships and dangers that Michaux endured on the North American frontier and on his return home. But it also conveys the soaring joys of exploration in a new world where Nature still reigned supreme, a paradise of plants mostly unknown to science.

Charlie Williams is retired librarian from the Charlotte Mecklenburg Library in North Carolina. He recently authored André Michaux in North America; Journals and Letters, 1785–1797 and he edited The Annotated Memoirs of the Life and Botanical Travels of André Michaux by J.P.F. Deleuze and chairs the André Michaux International Society (AMIS).

This Conserving Carolina Speaker Series event is made possible thanks to the Landrum Library.